Главная / Новости / Guzel Sagitova: We receive a lot of feedback from Kazan residents with a request to continue the “Tree of Life” project 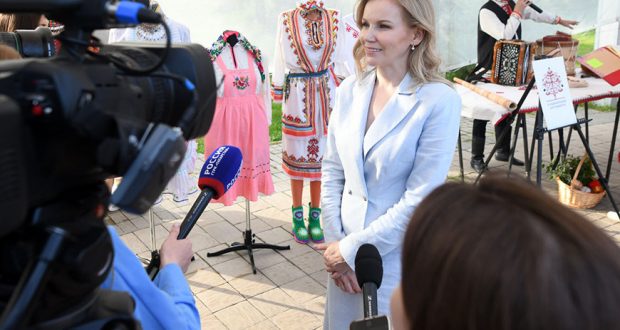 Guzel Sagitova: We receive a lot of feedback from Kazan residents with a request to continue the “Tree of Life” project

Guzel Sagitova: We receive a lot of feedback from Kazan residents with a request to continue the “Tree of Life” project

The day before, a festival of Mordovian culture, the final event of the “Tree of Life” project, was held in the Black Lake Kazan park. Citizens and guests of the capital got acquainted with traditional costumes, arts and crafts, folk games and proverbs, learned recipes for traditional Mordovian dishes.

Household items and utensils of the Mordovians-Erzya and Mordovians-Moksha were presented at the exhibition of decorative and applied arts. In addition, masters of arts and crafts from Tatarstan and Mordovia conducted training sessions at the festival. So, anyone could learn the features of national embroidery and weaving, make a belt, a bracelet, a spin doll, symbolizing the family hearth, as well as a Mordovian musical wind instrument – nudes.

There were two playgrounds for the youngest guests of the holiday. At the “Glade of Childhood” the children played outdoor Mordovian games, decorated the Mordovian folk costume in the right colors. Boys and girls got acquainted with Mordovian fairy tales at the Fairy Meadow site. During the game “Catch a fish” each child was able to learn the names of fish in the Mordovian language.

At that time, a master class in traditional Mordovian dance was held in the amphitheater, the folklore ensemble “Erzyanka” from Leninogorsk, the Mordovian folk song ensemble “Od oyme” and the Kazan folk group Zakaria performed. The headliner of the concert was the ethnographic folklore studio “Merema” from Saransk. The festival ended with an ethnic disco and a DJ set on Mordovian melodies performed by Malsi Music, the department for the implementation of national policy in the field of linguistic culture of the Executive Committee of Kazan reports.

The Tree of Life is so far the only project that we are implementing jointly with the Assembly of the Peoples of Tatarstan. The districts of the republic and neighboring regions make a great contribution to filling the sites, this time representatives of the Tetyushsky, Leninogorsky, Cheremshansky, Pestrechinsky regions of Tatarstan, as well as Saransk (Mordovia) were involved. Kazan citizens can get acquainted with everyday life, folklore – traditional culture, which is why the project is called educational. We receive a lot of feedback from Kazan residents with a request to continue the project next year and dedicate it to Russians, Bashkirs, Uzbeks, Tatars. We hope that the Tree of Life will continue,” said Guzel Sagitova.