Главная / Новости / “Tradition is not the past, but the most modern present”: the National Museum collected the heritage of the Bulgars 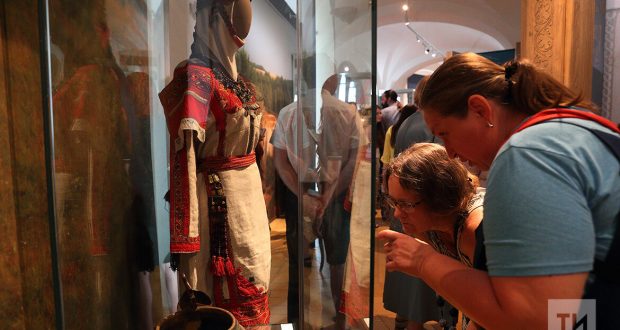 “Tradition is not the past, but the most modern present”: the National Museum collected the heritage of the Bulgars

The Russian Ethnographic Museum (REM, St. Petersburg), the State Hermitage, the State Historical Museum (GIM, Moscow) and the National Museum of Tatarstan have teamed up to demonstrate the palette of continuity of its culture on the 1100th anniversary of the adoption of Islam by the Volga Bulgaria. The result of the joint project was an exhibition of three hundred unique exhibits “Volga Bulgaria. Great Heritage”, which opened today at the National Museum of the Republic of Tatarstan.

“This is a very complex, important and interesting project. We speak through this exhibition about cultural heritage. You know, in fact, we were deceived: we were told that traditions are the past. Traditions are the most modern that we have, it is traditions that we will take the future with you. It is important to understand and feel how traditions have been preserved for thousands of years, what was invented, created by various peoples, the heirs of whose culture we are today, which allows us to realize ourselves as separate peoples and as peoples who are able to live together. These complex and important questions for us today are heard at the exhibition, which is actually dedicated to the future,” said Yulia Kupina, director of the Russian Museum of Ethnography.

Jewelery tuberculate filigree made of the finest silver “threads”, silver rings with characteristic symbols of the Bulgars of the 11th-13th centuries, authentic clothes of the peoples who inhabited the once great medieval empire, as well as the interpretation of ancient cultural symbols in the art and craft of the 19th-20th centuries and in modern times – all visitors to the exhibition will see it. For example, in the Department of Archaeological Finds, among the exhibits provided by the Hermitage, there is a silver Bulgar ring with an ornament characteristic of that time (XI-XIII centuries) – that is, this ring was literally dug up by archaeologists on an expedition. And in the last hall of one of the showcases there is an almost similar ring, slightly more massive, but with the same recognizable floral ornament – it was bought from the population during an ethnographic expedition to the region in the 1920s. An item of ancient craftsmen, of the same age as the Hermitage sample – 900-1000 years old – was kept in the family, it was worn, cherished and passed down from generation to generation.

“The Russian Ethnographic Museum has been working in the region for decades, the Hermitage conducted excavations here and then restored these things… We are always extremely happy and glad to present the cultural heritage of the region in the region itself. After all, it so happened historically that major museums sometimes took these collections out of the regions. We wanted visitors to understand that the tradition created by our ancestors continues to live in our culture,” added Kupina.

Preserving this heritage and transmitting it to the future generation is the task of the people of today, continued the thought of the director of the Russian Ethnographic Museum, First Deputy Minister of Culture of Tatarstan Yulia Adgamova.

Exhibition “Volga Bulgaria. The Great Heritage” can be seen in Kazan until September 4. Then the exposition will travel to other cities: from September 30 to October 23, visitors to the National Museum of Bashkortostan in Ufa will see it, and from November 3 to 23 – the Historical Museum of the South Urals in Chelyabinsk.