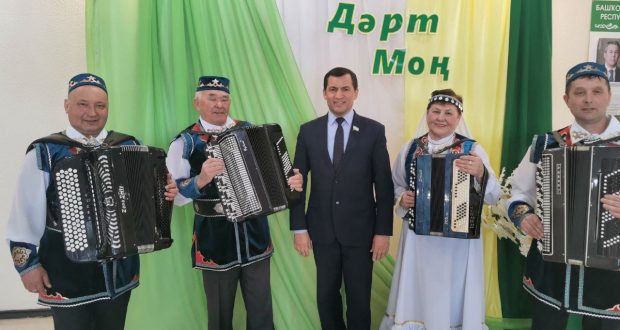 Fervent, cheerful, folk, joyful, inspiring – all these epithets were applicable to the gala concert of the open regional festival of Tatar culture “Rukh. Dart.Mon”, which on March 11 was massively held on the stage of the Bizhbulyak Palace of Culture.

We remind   that the qualifying round of the open zonal festival was held from November 22 to 27 on the website of UIA Bizhbulyaksky DK in an online format. And then the Organizing Committee received 104 applications from 15 districts, 2 cities of the republic and 4 applications from the neighboring Republic of Tatarstan.
And now the most talented and colorful of them – these are 13 Tatar creative teams from Miyakinsky, Fedorovsky, Buraevsky, Tuymazinsky, Sterlibashevsky and Bizhbulyaksky districts and from the city of Tuymazy met on the main stage of Bizhbulyak at the final gala concert. The gala concert was opened by Alexey Alexandrovich Danilov, deputy head of the administration of the Bizhbulyaksky municipal district. In his welcoming speech, Alexey Aleksandrovich, on behalf of the district administration, warmly greeted the participants of the festival and wished them success and reaching new creative heights.

The participants of the final round demonstrated their skills and talent in 6 genre areas:

“folk vocals”, “pop vocals”, “choreography”, “folklore”, “instrumental creativity” and “decorative and applied and folk crafts”. Interesting, bright performances of the finalists – the leading Tatar creative ensembles, left no one indifferent. Each performance told about the rich and unique culture of the Tatar people, delighting the audience with turbulent emotions, bright costumes and beauty of performance.