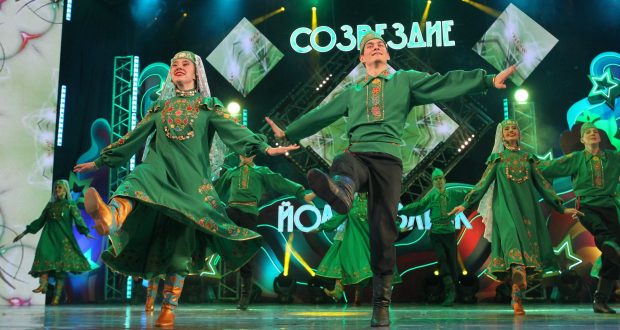 Within the walls of KSK KFU “UNIKS” the grandiose Gala concert of the XXII annual open republican youth festival of variety art “Constellation-Yoldyzlyk” has ended. The best of the best children of the “Constellation” performed on stage and demonstrated their talents to a wide audience.

More than 40 bright performances to the sounds of pop standards and music from different peoples of the world were presented by more than 1300 finalists of the project.
It was here that the first winners of this year’s festival movement became known.

“What a pleasure to be on this stage again. For me, participation in the project was the first this year. I visited four zonal stages. And I must say it was an amazing experience. I want to express my gratitude to the parents of our talented children, music directors, heads of districts. Dmitry Alexandrovich Tumanov – a deep bow to you for what you are doing. You find the most talented children of the regions of the republic and give the opportunity to come to Kazan and perform at the main venues of the city,” said Sofya Mustafina, Deputy Minister for Youth Affairs of the Republic of Tatarstan.

“Today, a real celebration of youth unfolds on this stage. We are summing up the first results of this year’s project. Before our eyes, new stars of the scene are lit. And I am especially proud that these stars are our children,” said Tatarstan Deputy Minister of Culture Damir Natfullin.

The fame of the festival “Constellation-Yoldyzlyk” spreads far beyond the borders of the republic. Therefore, children from other regions of Russia traditionally become part of it. This time, representatives of Moscow, Mari El, Chuvashia, Bashkortostan, as well as the Samara Region and the Perm Territory joined the project. For the first time this year, a young singer from the Donetsk People’s Republic became a participant in the project.

“We heard about the project from our friends from Kazan. Frankly, we did not expect that in such a grandiose project we would go so far and find ourselves on the UNIKS stage. We are grateful for this unique opportunity. We hope to repeat our success next year,” shared the mother of a participant from Yoshkar-Ola.

Already on April 22 at 17.00 in the KRK “Pyramid” the final Gala concert of the festival “Constellation-Yoldyzlyk” will take place. Here the names of other winners, as well as the owners of the Grand Prix of the project, will be announced.

In addition, the winners of the special prize “Advantage  of the Republic” for the preservation of national traditions, established by the State Song and Dance Ensemble of the Republic of Tatarstan only this year, will be announced from the stage.

The President of the Republic of Tatarstan Rustam Minnikhanov, as well as the executive secretary of the Commission of the Russian Federation for UNESCO Grigory Ordzhonikidze are planning to attend a large-scale concert of the grandiose festival.

We remind  that the festival movement “Constellation-Yoldyzlyk” is held under the auspices of the Commission of the Russian Federation for UNESCO and under the patronage of the President of the Republic of Tatarstan Rustam Minnikhanov.