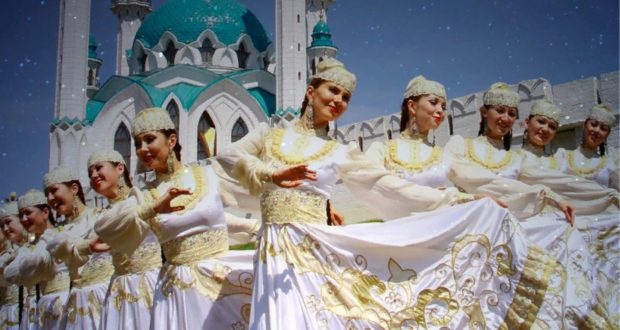 Astrakhan will host a concert program “In the footsteps of Bulgaria”

Astrakhan, after Samara and Volgograd, will be the third in the tour of the State Song and Dance Ensemble of the Republic of Tatarstan.

Already this Friday, May 13, at 18:00 on the stage of ADK “Arcadia” the famous band will perform with a concert program “In the footsteps of Bulgaria” within the framework of the federal program “We are Russia”.

The State Song and Dance Ensemble of the Republic of Tatarstan is the only professional group in Russia today, where the original national traditions of the Tatar people, their musical and dance culture are preserved at the highest professional level. This year the team is celebrating its 85th anniversary.

In the first part of the concert, the audience will hear the masterpieces of Tatar culture – numbers with a great history, having deep folklore roots. The orchestra and choir of the ensemble will acquaint the audience with the sound of heartfelt folk Tatar melodies and songs, such as “Ay, bylbylym”, “Sibele chachak”, “Fazyl chishmase”. The musical part will be complemented by Tatar dances, full of warmth and rich in comedic episodes: “Tezma”, “Yulyk”, “Silver Bracelet” and others.

In the second part, the viewer will see the musical and choreographic performance “Tuy” (“Wedding”), based on the folklore and ethnographic materials of the Kazan and Siberian Tatars of the early 20th century.

“The very idea of ​​the play came up a long time ago. Over the 85 years of the Ensemble’s existence, we have done similar productions according to Soviet rituals more than once. I wanted to show a merchant’s wedding. For example, it contains a nikah scene, a crying bride, and other ritual things that we wanted to convey to young people. Everything that happens at a wedding is there, ”said Airat Khametov, director of the ensemble.