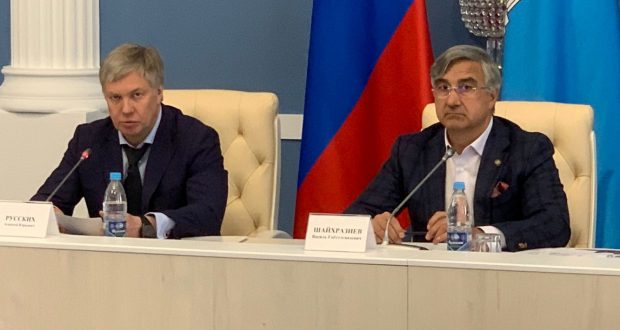 Deputy Prime Minister of the Republic of Tatarstan, Chairman of the National Council, World Congress of Tatars Vasil Shaykhraziev is on a working trip to Ulyanovsk. Here he took part in the next meeting of the organizing committee for the preparation of the XXII Federal Sabantuy in the Ulyanovsk region. The festival will take place on June 17-18 this year.

During the meeting of the organizing committee, they discussed the general plan of events for the XXII Federal Sabantuy, holding many cultural and sports events, including the regulations for the national wrestling “Koresh”. Also, issues of installing a national courtyard, engineering infrastructure and landscaping of the Sabantuy territory, issues of logistics and accommodation for guests were considered here.

The program of the two-day holiday will begin on June 17 with the traditional horse races. After equestrian sports events, a concert of masters of arts from the Republic of Tatarstan and the Ulyanovsk region will be presented to the guests.

On June 18, the official opening of the holiday will take place, where the participation of the President of the Republic of Tatarstan Rustam Minnikhanov and the Governor of the Ulyanovsk region Alekesey Russkikh is expected. Here, according to a long tradition, the symbol of the Federal Sabantuy – “Tulpar at” will be handed over.

The holiday will be decorated with performances of poets, professional and amateur groups, accordion players from the Ulyanovsk region and regions of Russia, a book fair will be held dedicated to the 300th anniversary of the publication of the first book in the Tatar language, a grand opening of the site of the historical and cultural complex “Bulgarskaya Zastava” 1100th anniversary of the adoption of Islam by the peoples of the Volga Bulgaria, and other events.

Earlier, the Chairman of the National Council got acquainted with the venues of the Federal Sabantuy in Ulyanovsk. These are the territories of the Ulyanovsk Hippodrome and Victory Park.