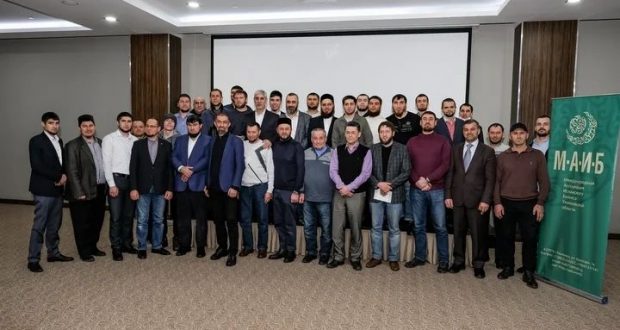 A meeting with Ruslan Kurbanov took place in Ulyanovsk

On January 5, a very important event for the city’s Muslims took place at the Radisson Hotel in Ulyanovsk. A meeting was held with Ruslan Kurbanov, a political scientist, journalist, orientalist, public figure. The topic of the meeting was “Formation of the consciousness of a modern Muslim”.

Ruslan Kurbanov talked a lot about the development of modern Muslims, about  coming of the community to a qualitatively new level, about the role of Muslim women

Ruslan Baibikov, Mufti of TsDUM of the Ulyanovsk Region, was invited as the guest of honor. He also noted the relevance of the topics raised at the meeting.

Rafael Aliyev,  head of the Tsakhur diaspora in the city of Moscow, spoke about the importance of preserving the native language and culture.

Magomedov Arbahan, professor at the Moscow Linguistic University, noted that Muslims of the past were always ahead of scientific and technological progress.

Also,  at the event was Sergey Pakhovsky, head of the department for national and confessional issues under the government of the Ulyanovsk region. He noted the importance of interethnic and interfaith relations in the region. And he expressed his readiness to hold detailed events on these topics in Ulyanovsk.

The themes of family values, interethnic and interfaith relations, sectarian thinking and its harmful influence on the consciousness of people, the role of the media and its impact on public consciousness – all this was voiced by the most famous persons of the Muslim world of our country.

The topics raised in this event turned out to be so relevant that a high interest was shown by activists and top officials from other regions. The event in Ulyanovsk was attended by guests from Samara, Penza, Astrakhan regions, the Republic of Tatarstan, Mordovia.

“I really enjoyed my performances as an organizer and moderator of this meeting. Ruslan Kurbanov and Ramil Khazrat Yunusova, they are really titans of gurus in their field – said Khairullov Zhemel, head of the MAIB

The event was organized by the International Association for Islamic Business (IAIB), the BFM Muslim Business Forum, and the Sadaka Charitable Foundation.

The participants and speakers of this event expressed their deep gratitude to the organizers and the desire to see such events in Ulyanovsk more often.