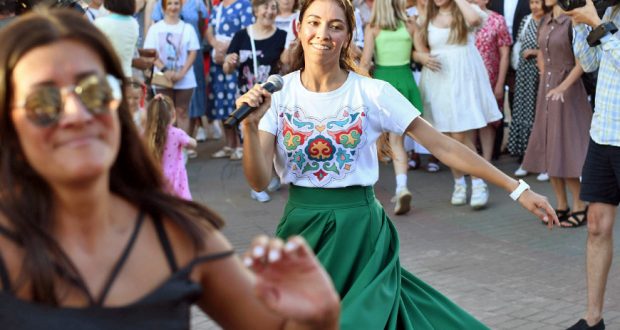 A master class in Tatar folk dance took place the day before on Bauman Street in Kazan. Classes within the framework of the project “Hәrәkәttә – bәrәkәt” will continue until the end of summer.

The master class was held under the strict guidance of experienced mentors, among them are the ballet dancers of the State Song and Dance Ensemble of the Republic of Tatarstan Danil Iskhakov and Aliya Mukhammatgalieva, the soloist of the Kazan dance ensemble Damir Nasretdinov, as well as the laureate of international competitions and festivals, teacher-choreographer in folklore dance by Said Minubaev, according to the department for the implementation of national policy in the field of linguistic culture of the Executive Committee of Kazan.

The session was accompanied by live music. “We show a traditional Tatar dance with games. Previously, boys and girls organized such meetings with songs and dances, where dances and games were inseparable from each other. The movements of the Tatar dance, which is performed in our time, date back to the beginning of the 20th century,” said Saida Minubayeva.

The events of the project “Khәrәkәttә – bәrәkәt” are held by the Mayor’s Office of Kazan together with the Directorate of Parks and Public Gardens of the city. Recall that this year the parks hosted three summer sports and creative activities of the project “Hәrәkәttә – bәrәkәt”. At the first lesson on the embankment of Lake Kaban, 500 Kazan citizens took a master class on the basics of the Tatar dance “Yarmak vagy”. At the second lesson of the project, the citizens of Kazan learned to tap dance. The third master class, held in the Gorkinsko-Ometevsky forest, was devoted to aerobics. Meetings will be held until September. In the summer season last year, 14 classes were held.