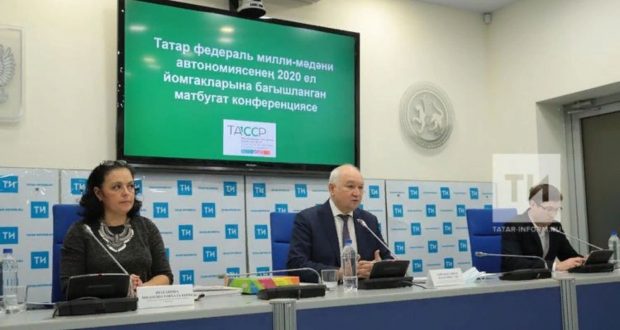 On December 25, 2020, on the first floor of the Tatar-inform news agency, a press conference was held with  Deputy of the State Duma of the Russian Federation, Chairman of the Federal National Cultural Autonomy of the Tatars Ildar Gilmutdinov.

At the press meeting, the music collections “Tugan teldә Kyrybyz” (Song in the native language), “Kan Kylysy – Kyrlarda” (Soul – in songs), which were published by the Federal National Cultural Autonomy of the Tatars, were presented. They are designed to represent Tatar songs for children and adults. The number of books is limited, therefore, at the request of the regions, collections are distributed to schools and kindergartens.

A project of video lessons dedicated to the heritage of the Tatar people, developed jointly with the Idel youth center, is presented. The master classes are divided into six parts: history, acting, vocals, blogging, cooking, handicrafts. Reseda Salakhova conducts a master class in theater skills, Rinat Galiakhmetov in blogging, Aisylu Gabdinova in vocals, Leysan Khazieva in handicrafts and others.

Also, the public organization “Federal National-Cultural Autonomy of the Tatars”  has  summed up the results of the Competition of plays for amateur theater groups “Young talents – Yash talentar”. The aim of the competition was to activate young talented authors in the creation of plays (dramatic material) for amateur theaters, the concept of which reflects the traditions, ethnic characteristics, way of life and national culture of the Tatar people. An electronic collection of works by young writers has been published.

State Duma Deputy Ildar Gilmutdinov spoke about the advantages of using the online format in the population census.

“We need to work together within the law. It is very convenient that the census takes place online. Young people did not take an active part in the population census, the online format will also attract young people. ” According to Gilmutdinov, five and a half million people for various reasons could not take part in the census. Information about them is entered, but nationality is not indicated.

The deputy expressed his wishes: “I would like people to be very honest. There should be no calls for a person to be registered with a different nationality, ”he said.