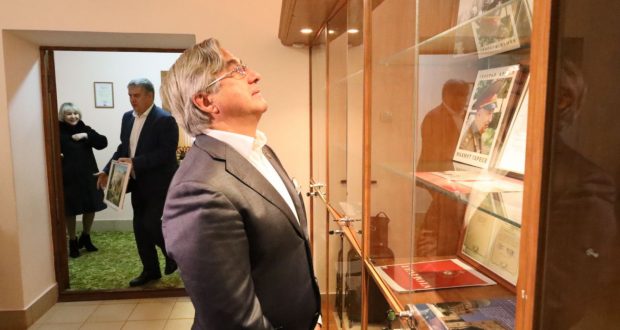 Today Deputy Prime Minister of the Republic of Tatarstan, Chairman of the National Council of the World Congress of the Tatars Vasil Shaykhraziev visited the Tatar Center of Culture and Art named after A.M. Ishimbaev.

This cultural center was opened in 2014. Today there is an exposition in it, which presents utensils, musical instruments and records, books and photographs, folk costumes. In addition, in this center you can order a master class and learn the technique of Arabic script.

Museum exhibits are located in four halls. In the first hall there are ancient items: folk costumes, musical instruments, utensils. In the second hall there are photographs and documents of the beginning of the 20th century, printing products, information stands telling about the outstanding ancestors of the Kasimov Tatars. The third hall is dedicated to local historian, honorary citizen of the city of Kasimov Akhmed Ishimbaev. In the Fourth Hall there is a museum exposition dedicated to the outstanding female ruler Syuyumbikе.