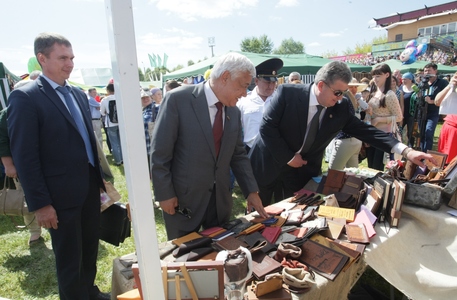 Farid Mukhametshin has been presented the bird of happiness in Yelabuga

In Tatarstan the VII All-Russian Spassky fair of folk crafts is being held. The first buyers appeared to be the chairman of Tatarstan Parliament Farid Mukhametshin and head of Yelabuzhsky region Gennady Emelyanov.

Spasskaya Fair has become the hallmark of Yelabuga in 2008. The organizers have tried to recreate the atmosphere of a bustling fair here of XIX century with booths, street entertainment, performances by folk groups. In the framework of the fair annually National Festival of bell ringing contest “Spasskaya baryshnya (lady)” and the “Onion Festival” is held where all visitors are treated to the onion soup and cakes. Not by chance the fame of the fair quickly spread throughout Russia. Craftsmen from all over the country used to bring their products here. Tula residents bring samovars and cakes, Orenburgers – shawls, Bashkirs – honey. And about 2 years back foreigners also started to come to the fair. And not only from the CIS countries, but also from the European Union. Frequent guests on Yelabuga ground became representatives of such exotic countries as Ecuador. They sell at the fair braided leather and CD-disks with ethnic music. Not accidentally, the current opening of the fair was an event of the federal scale. One of the salutary telegrams has been sent by the chairman of the Russian State Duma Sergey Naryshkin. It reads the following “Spasskaya Fair has become an important event in the cultural life of our multinational country. Respect for the rich historical and cultural heritage of the peoples of Russia – the key to constructive social development, and a key factor in ensuring peace and harmony in our common home, “- said S. Naryshkin.

A lot of warm words at the opening of the exhibition were said by head of Tatarstan Parliament Farid Mukhametshin.

– Spassky fair that opens the seventh time its doors today with confidence can be called a unifying holiday, and holiday of trade and culture and architecture, holiday of residents and peoples of Russia. The fair has grown, it has ceased to be just a Yelabuga but all-Russian one. I am very glad that today among the masters there are also the representatives of the Crimea, they are still only studying our experience, wonder how in such a small town you can gather so many people, and we say that it is our tradition – the speaker said.

Representatives of Crimea have brought to the fair exclusive women’s jewelry made of horn.

They were not the only ones who first came to Yelabuga. Among the new participants of the fair this year, representatives of Belarus and Uzbekistan. Belarusians presented to the customers original paintings, decorated with gold leaf, and the Uzbeks posted on the counter famous Bukhara knives and other forged products. Namely, their goods attracted attention of Parliament Speaker Farid Mukhametshin when he bypassed fair among the first customers. He purchased one of the knives, and received a gift, forged statuette of Humo bird from masters . This mythical bird is depicted on the State Emblem of Uzbekistan and brings happiness to their owners.

August 2 and 3, the Fair will host the festival of art song “Inspiration”, which has been held in Yelabuge since 2001.