Home / News / Holiday of Tatar culture in the Saratov region 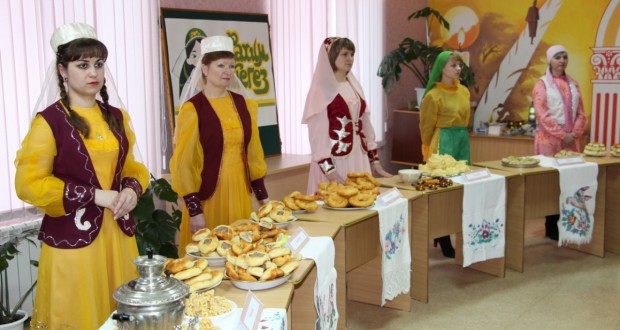 Holiday of Tatar culture in the Saratov region

The town in Saratov Oblast Petrovsk held a festive evening devoted to the Tatar culture.

The central library of gathered local residents and representatives of the Tatar villages nearby. Guests briefly were told about the history of the Tatar people, presented the books of national poets, and informed about other prominent personalities.

During the event, creative groups performed folk songs, children read poems about native land. The hosts of the evening reminded of the great contribution of the Tatar people in scientific, cultural and educational spheres of the Russian state. They told about heroes and generals, writers and artists, politicians and sportsmen, scientists and religious figures that are directly related to the second nation in Russia.

The Mufti of the Saratov region Mukaddas Hazrat Bibarsov in his speech noted a special role of the Tatar people in the creation of the Russian state. “The Tatars are not just ethnicity, they are constituent peoples which have great potential,” – he said. According to him, it is very important to hold such meetings to preserve identity. In addition, Mukaddas Hazrat called for spiritual development to strengthen national identity.

The event was visited by the head of the Petrovsky region Sergey Goryachev and chairman of the local Public Council Nikolai Babanskii. They spoke about the long friendship with the Tatar people and their rich culture. As a sign of respect for the representatives of one of the Tatar villages N. Babanskii made a present of an exemplar of the Koran translated into Russian.

At the end of the meeting all the guests enjoyed national Tatar cuisine.