Home / News / How do the Tatars of the Abai region live today? 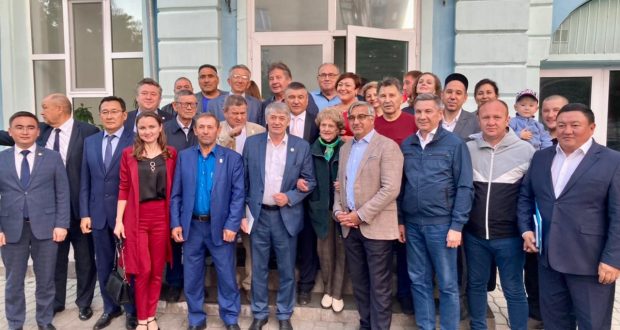 How do the Tatars of the Abai region live today?

Today, on August 23, on the basis of the Tatar School of Arts in Semey, a meeting was held between the leadership of the regional Assembly of the people of Kazakhstan, as well as the activists of Tatar public organizations, with the Deputy Prime Minister of the Republic of Tatarstan, Chairman of the National Council of the World Congress of Tatars V.G. Shaikhraziev. The main topic of the dialogue was the socio-cultural activities of the Tatars living in the Abai region. According to the director of the House of Friendship Nadezhda Sharova, today the priority task is to preserve interethnic communication.
“Today, representatives of many nationalities live in Semey, however, the Tatars are the most active. Their position is an example for other peoples,” Sharova explained.
As it became known, the cultural heritage of the Tatar people is being actively supported and developed at the Tatar School of Arts, where today’s meeting was held. For 30 years of the school’s functioning, students and teachers have actively participated in the social and cultural life of the city, region, republic, near and far abroad. Here, children receive musical education according to the curricula approved by the Ministry of Education and Science of the Republic of Kazakhstan, and, in addition, they study in depth the song and dance art of the Tatar people. The certificate received by graduates of the school gives the right to enter any musical educational institution of the middle level.
On the basis of the school, Tatar folk ensembles of the city palace of culture rehearse: folklore and ethnographic “Istalek”, accordionists “Ilham”, song and dance “Irtysh monary”. Here, the projects of the public fund “Centre of Tatar Culture” Altyn Torki Bishege “, the private fund of the International Festival of Tatar Art” Irtysh Monary “, the Youth Public Association” Tatar Ethno-Cultural Children’s and Youth Organization “Miras” are being discussed.
Meanwhile, the opening of a new school building is scheduled for September 10 this year. The arrival of the President of the Republic of Tatarstan R.N. Minnikhanov is expected for the opening.
V.G.Shaikhraziev supported the initiatives of compatriots aimed at strengthening national traditions and noted that Tatars living far from their small homeland can always count on assistance from the World Congress of Tatars.