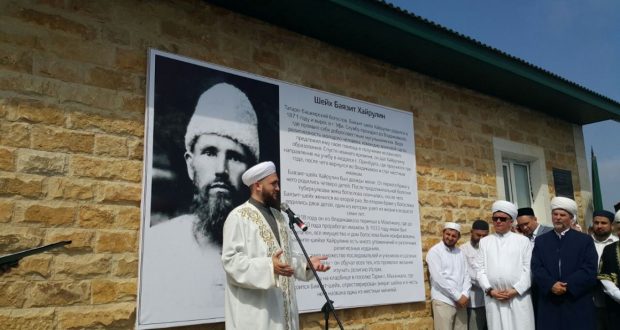 Early in the morning in the settlement Tarki in Makhachkala, a mosque has been inaugurated in honor of the Tatar spiritual guide Sheikh Bayazid-Khairulin (1871-1950).

The event was attended by representatives of the Republic of Dagestan muftiat, clergy leaders of neighboring republics, regions and territories, as well as representatives of religious, educational institutions and scholars from all over the country.

The composition of the delegation from the RT DUM (Religious Board of Muslims) included: deputy mufti of Tatarstan for academic affairs, rector of Russian Islamic University Rafik Mukhametshin, chief Kazy of the

Republic of Tatarstan Jalil hazrat Fazlyev, director of publishing house “Huzur” Rishat Khamidullin, imam mahtasib from N.Chelny city Alfas Hazrat Gaifullin and a member of Ulem council RT DUM hazrat Syed Shagaviev. All the guests and the hosts of the holiday made ziyarat to the grave of Bayazit-Sheikh Khairulin in Makhachkala, and then took part in the official opening of the mosque.

During his speech, Mufti of Tatarstan Kamil Hazrat Samigullin greeted Dagestani Muslims and expressed great thanks for the invitation of Tatarstan on such an important event.

“Bayazid-Sheikh Khairulin was a very wise man, and this is confirmed by many facts associated with him. An outstanding theologian put a lot of energy and effort to the spiritual and moral education of the people, and not only the Tatars of Makhachkala but numerous other peoples of Dagestan “, – said the Mufti of Tatarstan.

Life of the Sheikh, a native of Ufa province, was not easy. Bayazid-Sheikh Khairulin learned in various madrasas, worked as imam. In 1933, he underwent de-kulakization, dispossessed all property and theologian house was confiscated. About Bayaz Sheikh Khairulin there are many references in the various religious publications, including written about him by Rizaetdin

Fahretdin. Being a disciple of Sheikh Zainulla-ishan Rasulev, he played a major role in preserving the Islamic tradition in the XX century in our country.

Also, today, August 1, in the capital of Dagestan, the doors opened another newly built mosque, named after another influential Islamic figure of Russia XX century, Sheikh Zainulla-ishan Rasulev, teacher of Sheikh Bayazid Khairulin. However, Sheikh Zainulla-ishan played a huge role in the development of many other Dagestani alims. By the way, the son of Zainulla Rasulev, Gabdrakhman Hazrat was Mufti in our country from 1936 to 1950.

Opening the mosque, Kamil hazrat Samigullin noted the great contribution to the development made by the Sheikh for Islamic education, including the creation of new method madrassas in the Southern Urals “Rasuliya”.

“In due time Zainulla-Ishan Rasulev turned Troitsk in the main center of the Russian Empire, in educating Muslims, and it is thanks to his madrassas. There were taught not only the sharia sciences, but also secular. It is also important that the Sheikh studied Sharia science from recognized scholars of his time. There not only Dagestan Tatars were educated, but also comers from Central Asia, which is why he is still being remembered and honored. Ahmadhadi Maksudi wrote about him:

“The greatest merit of Hazrat Zainulla before the nation consists in the fact that he gave answer to any of the questions of modernity, Sharia-compliant” – Kamil Hazrat said.

Sheikh was born in the Uchaly region of Bashkortostan trained in various madrasas, raised outstanding students and wrote numerous works on various Islamic sciences. The number of followers of Hazrat Zainulla counted thousands of people, among whom were the fraternal peoples, Tatars, Bashkirs and Kazakhs. Sheikh Zaynulla Rasulev died aged 84, was buried on the ancient Muslim cemetery of Troitsk, the Chelyabinsk region.

It should be noted that this year the RT DUM propaganda department has prepared a film about the Tatar Ishans. It tells, including also about Zainulla Rasulev and Bayazid-Sheikh Khairulin.

Today Tatarstan delegation scheduled trip to Derben, where it is planned to visit the oldest mosque in Russia and zayarat to the grave sites of the Prophet’s companions.