Home / News / In Poland, the Center of Education and Culture of Muslim Tatars 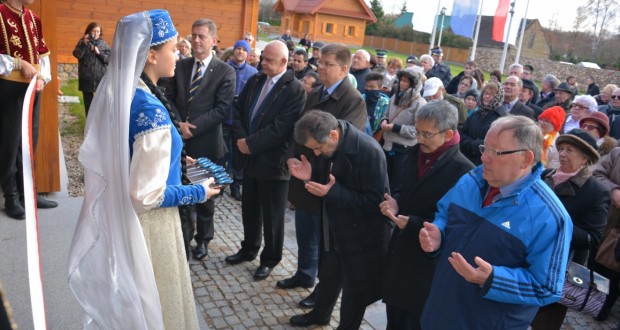 In Poland, the Center of Education and Culture of Muslim Tatars

Delegation of the society “Kardashlar” from Kaliningrad took part in an official opening of the Center for Education and Culture of the Muslim Tatars in Poland (Centrum Edukacji i Kultury Muzułmańskiej Tatarów Polskich) in Krushinyana (Podlasie).

After the opening ceremony the meeting of the delegation from Kaliningrad at the House Pilgrim (Bohoniki) with societies Fundacja Tatarskie Towarzystwo Kulturalne (FTTK) (Tatar society Cultural Foundation) and Związek Tatarów Rzeczypospolitej Polskiej (ZTRP) (Union of Tatar Republic of Poland), and Tatar dance and vocal ensemble Buńczuk (Bunchuk) was held. Melody of Tatar songs were a friendly decoration of the evening passed very warm and amicably. Polish Tatars spellbound listened to the young singer from Kaliningrad Ilnar Ibragimov, asked him to sing more and more. The hosts of the meeting showed the texts albums of Tatar and Bashkir songs that they had collected, translated to a Polish transcription. It turned out that they were in

urgent need of original Tatar songs. Kaliningradians did not come empty-handed, but with traditional Tatar cuisine. Especially for the occasion some honey chak-chak pieces were bakede, souvenirs in the form of the Kazan Tatar skullcaps presented. An active cultural co-operation was made possible by the conclusion of appropriate agreements, mutually approved program of international cultural cooperation in the years 2015-2017.