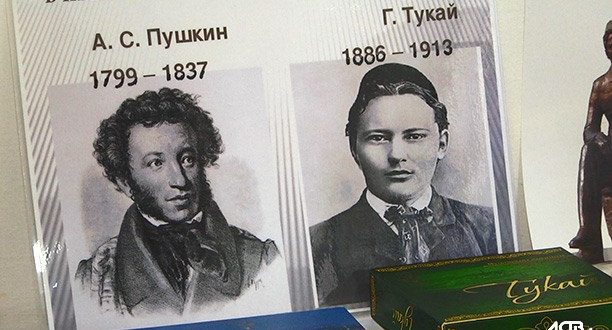 Regional National-Cultural Autonomy of the Sakhalin Tatars held a creative evening “Pushkin and Tukai” by Chekhov’s book Museum “Sakhalin Island”. It became one of the components of the Day of National Unity.

It was preceded by an exhibition of literature from the libraries of the regional public organization Tatar “Educational and Cultural Center” Tugan tel”(Native language), city  named after Kuznetzov  and oblast,  scientific universal  library. These books, as  if  were inviting  guests to immerse themselves in a magical world of the poems of   the two recognized classics. Among the guests were Elena Stolyarova, chairman of the City Duma, representatives of libraries, museums, national diasporas and national associations of Sakhalin, as well as writers, elders, Tatars from Nevelsk, Dolinsk,

Korsakovo, Poronaysk, Okha.  By  songs in two languages ​​the Sakhalin Children’s Ensemble “Tatarstan” (art director Zakia Valitova) and the children’s ensemble “Voice of the Island” from Yuzhno-Kurilsk (artistic director Jamil Karpov) delighted  the guests. The children won their  applause. The final chord of their performance was the song “You Live My Russia”, it was eagerly picked up by all the participants.

By all accounts, the evening has been  very well organized. For many it was a small discovery to find out how the creative paths of Pushkin and Tukai crossed.