Home / News / Information on the Congress of Tatars Alliance in Europe 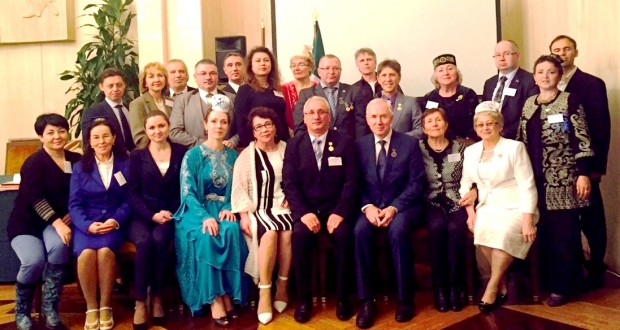 Information on the Congress of Tatars Alliance in Europe

October 17, 2015, in Paris (France), the II Congress of the Association of Tatar public organizations in the European Union “Alliance of Tatars in Europe” took place. As you know, the purpose of the organization is the implementation of projects to support the preservation and development of Tatar culture, learning the Tatar language, to be informed about the achievements of the Republic of Tatarstan in the European Union, the establishment of contacts between the compatriots living in the EU. The founding congress of the European Alliance of Tatars was held in April 20-23, 2013, in Brussels, at the European Parliament. In 2014, the organization was officially registered and entered in the register of the Ministry of Justice of Belgium.

The congress in France, was attended by 46 delegates from 17 countries of the European Union (Austria, Belgium, Bulgaria, Great Britain, Germany, Hungary, Italy, Latvia, Lithuania, Netherlands, Poland, Slovakia, Finland, France, Czech Republic, Sweden, Estonia) and including as an observer, a representative of the Tatars in Finland.

The congress made a detailed report by the Alliance of Tatars in Europe for 2013-2015, approved a further plan of the Alliance and adopted the resolution. The main topics that were discussed – the experience Tatar public organizations of the EU countries and their interaction with the historical homeland and local authorities of the country of residence, and others. The session was conducted by chairman of the Alliance Flyur

At the beginning of the meeting the guests of honor delivered welcoming speeches to the delegates.

Alexander Konstantinovich Orlov welcomed the delegates and guests of the congress and in his speech said that more and more French people began to study the Tatar language, and stressed the need to fight for the status of the Tatar language in Europe. First, it is expressed in expanding the opportunities for its study, and in the future may develop into a new European cultural destination. According A. Orlov, the main European partner for the European Alliance of Tatars should become the Council of Europe, since under the Council successfully is forum of NGO organizations, and one of the directions of this international organization is to work with national minorities and the preservation of the language. In addition, Russia is a member of the Council of Europe since 1996 and has signed most of the conventions of this organization.

Iskander Yusupov Usmanovich stressed that the congress is held in the framework of the program of work with compatriots, thanked the Ministry of Foreign Affairs of Russia, the Russian Embassy in France and the Executive Committee of World Congress of Tatars for their support and assistance

during the preparation for the congress and wished to work constructively.

Igor Alexandrovich Shpynov noticed that in Tatarstan 115 nationalities reside in friendship and harmony, the republic is an example for many countries, and can show real results of national policy since the days of the Soviet Union.

Klimovskii Konstantin Vechaslavovich recalled that on November 5-6, Moscow would host the V World Congress of Russian Compatriots, at which important decisions concerning compatriots to be adopted. One of the sections of the Congress is to be devoted to work with subjects and experience of the Republic of Tatarstan in this direction is an example. K. Klimovsky noted that the Government Commission on the Affairs of Compatriots Abroad and further would support initiatives by our compatriots.

Ravil Kalimullovich Akhmetshin conveyed greetings from the President of Tatarstan Rustam Minnikhanov to the delegates of the congress. He informed the participants of the Congress on the work of the Plenipotentiary Representative of Tatarstan to unite compatriots in Moscow and spoke about the ongoing major events.

Razil Ismagilovich Valeev noted the importance and magnitude of such meetings. According to him, to be a Tatar – is a big responsibility. Responsibility for the preservation and passing language, culture, history, traditions and customs to future generations.

Rinat Zinurovich Zinnurov in his speech spoke about the main directions of the Executive Committee of the WCT in working with compatriots and stressed that to date, the World Tatar Congress brings together some 500 organizations, and initiatives of our compatriots find full support in the Republic of Tatarstan. He wished the Congress to work constructively.

The Congress read out Welcome from the Lithuanian MEP Waldemar Tomaszewski.

achievements of the Republic of Tatarstan in the European Union, the creation of the Tatar youth organizations and the involvement in civil society organizations an increasing number of young people and acquainting peoples of Europe with the Tatar culture.

April 22, 2013, the European Parliament successfully held a founding congress attended by delegates from 19 organizations from 15 countries of the EU, there were senior officials from

the Russian Foreign Ministry DSU, the Republic of Tatarstan, the Executive Committee of World Congress of Tatars, MEPs from Lithuania, Poland, England, Bulgaria. In the European Union one of the largest public organizations of compatriots has appeared.

In 2014, the organization was officially registered and entered in the register of the Ministry of Justice of Belgium.

The Congress adopted important documents: the Charter, the Charter of the Tatars of Europe and appeal to the leaders of the EU countries. The basis of the adopted European Charter Tatars lay principles spelled out in the European Charter. Namely, the principle of peaceful coexistence of different national cultures in a united Europe, the right to the protection of minority languages, and therefore the right of each nation to maintain and develop their national identity. And meaning of the appeal is that the Tatars live in Europe historically and want to live in peace and harmony with all the peoples of Europe, to preserve their ethnic culture. Preserve their national identity, at the same time to represent it among the European nations, thus enriching the European culture in general.

October 19, 2014, in Gdansk (Poland), an enlarged meeting was held, attended by 33 compatriots from 16 countries of the European Union.

One of the important tasks of the Alliance F. Sharipov noted the presence of representatives of the ATE in the various levels of government in the countries of compact residence of the Russian compatriots.

Flur Nuriyahmedovich asked members of the alliance to focus more on youth, involving them in the Tatar community youth to know their history, their roots, because without this knowledge there is no future, and that requires new forms of work and exchange of experiences.