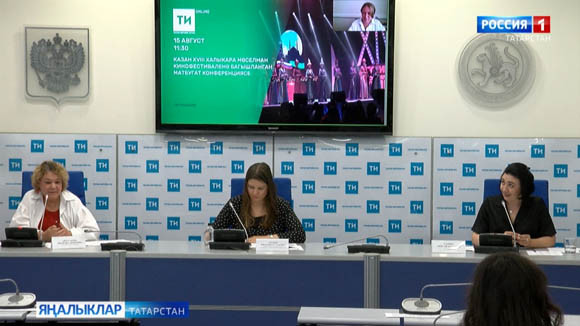 IA “Tatar-inform” hosted a press conference on the XVIII Kazan International Muslim Film Festival. The meeting with media representatives was attended by the head of the department of networking, international and interregional cooperation Victoria Dautova, the executive director of the festival Milyausha Aytuganova. Nina Kochelyaeva, chairman of the selection committee, joined the conversation online.

We remind  that the Kazan International Muslim Film Festival is one of the largest film screenings, which has been held in the capital of Tatarstan since 2005. This year it will be held from 7 to 11 September with the support of the President of the Republic of Tatarstan Rustam Minnikhanov, the Ministry of Culture of Russia and in partnership with the Russia-Islamic World Strategic Vision Group.

In total, 625 applications for participation from 44 countries of the world were registered this year. The selection committee of the festival has already made public the short list of works that made up the competition program. In total, 50 works were included – 10 each in five categories: full-length and short feature films, as well as full and short documentaries, a national competition.

Nina Kochelyaeva emphasized that the aim of the festival is to show the diversity of topics that excite contemporary directors. “Of course, these are mainly topics related to ethnic and religious, as well as global values, such as family, friendship, coexistence of people in peace and harmony, good neighborliness of different peoples,” she stressed.

She also noted that this year the selection committee screened out films that promote religious intolerance and call for military action. “For example, we had a discussion about a Moldovan film that tells the story of a girl killed by the Taliban (“Taliban” is a terrorist organization banned in Russia – Ed.). We came to a common position that this film cannot be presented, since the film opens with a scene where the Taliban are shooting civilians,” she said.

Nina Kochelyaeva noted that within the framework of the competition program, the audience will be presented with world premieres, including the family film “The Adventures of Little Bakhi” directed by Alexander Galibin, the Kazakh work “Mukagali”, the Iranian film “Silent Glory”, as well as a co-production product of Tatarstan and Kazakhstan film ” Tarlan”.

Among documentaries, the world premiere will be the work from Iran “No one is waiting for you.”