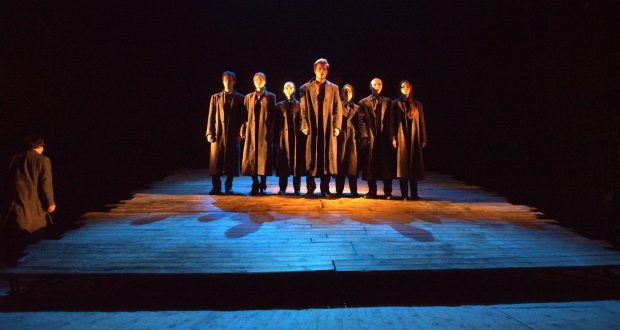 Kazan Youth Theater showed a performance at the international festival in St. Petersburg

Kazan Theater for Young Spectators showed the play “The Besy  (Demons)” based on the novel by Fyodor Dostoevsky as part of the XXI International Theater Festival “Rainbow” in St. Petersburg. The company   of the performance received a diploma of a participant in the festival and a bronze statuette by the Soviet and Russian sculptor Vladimir Goreviy.

The show was attended by prominent Russian theatrical figures, including theater critic Vladimir Speshkov and theater directors Galina Polishchuk and Marina Idam. All of them highly appreciated the work of director Tufan Imamutdinov.

The festival dates back to February 2000 and is one of the most prestigious theater forums in Russia. In 2016, the project “Rainbow” was awarded a prize of the Russian government in the field of culture.

The concept of the festival is modern drama for young people, new theatrical forms, and topical direction. Every year “Rainbow” shows the most interesting performances from all over the world.

Theaters from the USA, Great Britain, Germany, France, Belgium, Estonia, Bulgaria, Greece and many other countries came to the festival. Among the participants of the festival in different years are world-renowned directors. Due to the epidemiological situation, the event will be held in the format of a Russian show, without  participation of foreign teams.

We remind l that the premiere of the play, staged within the framework of the federal party project “Culture of the Small Homeland”, took place on December 6, 2018. In 2019, the production won in the category “Event of the Year” at the VII annual theater award of the Ministry of Culture of the Republic of Tatarstan “Tantana-2019”, a participant in the XXII International Theater Festival named after Dostoevsky (Veliky Novgorod), and in 2020 – a participant in the All-Russian festival of young directing “Artmigration” (Moscow).