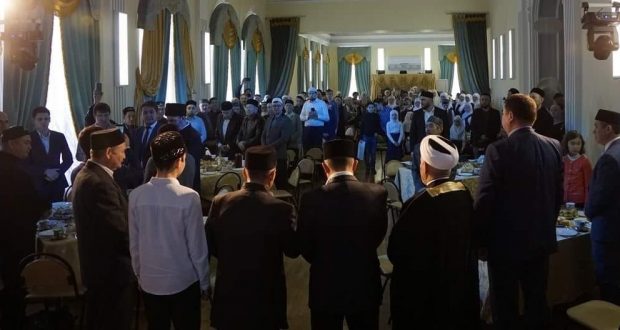 Maulid an Nabi was held in conjunction with the Centralized Religious Organization “Spiritual Administration of Muslims of the Tyumen Region and the Committee for Ethnic Affairs of the Tyumen Region,” social networks reported from the center of Tatar culture of Tyumen.

The event was opened by Danil Hazrat Nizyamov with a reading of the Koran. All the guests of the holiday were welcomed by  mufti of the Central Intelligence Center “DUMTO” Zinnat Hazrat Sadykov and awarded with the medal “For Spiritual Unity” of the Centralized Muslim Religious Organization of the COUNCIL OF MUFTIES OF RUSSIA – Ikandar Hazrat Yusupov. Invited guests congratulated Maulid on the holiday: Alexander Fedorovich Shevelev (Committee on Nationalities), Esangali Ibraev (NKA Kazakhs of the Tyumen Region), Leysan Khurmatullina (NKA of the Siberian Tatars and Tatars of the Tyumen Region), Albert Altynguzin (NKA of the Tatars of the Tyumen Region), Kamaldin Rasulov Fellowship of Dagestan in the Tyumen region).

On this festive day, there were salavats, Qassids and suras about the Prophet Muhammad (peace be upon him) performed by the Children of the Sunday School of the Ihsan Group, Shahban Kuramagamedov – Deputy Representative of the Dagestan Cultural Center of Ekaterinburg, students of Sunday schools in the city of Tyumen, representatives of the mosque named after Nigmatulla Hadji  village Yembaevo and others. The mufti assistant of the Spiritual Administration of Muslims of the Tyumen region, Dinar Hazrat Nafikov, spoke about the life of the prophet. Mәүlid an Nabi mөbarәk bulsyn!!!