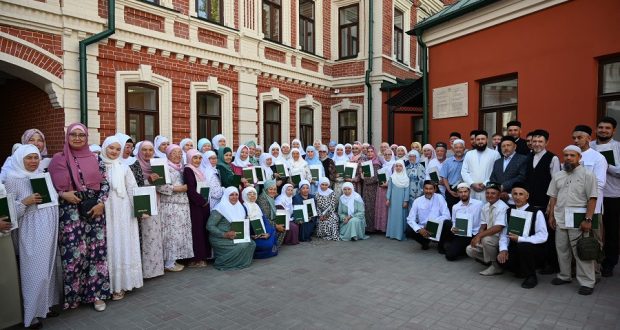 Mufti of Tatarstan presented diplomas to graduates of “Muhammadiya”

On August 18, graduates of the correspondence department of the “Muhammadiya” madrasah, having successfully passed the exams and defended their theses, received diplomas of secondary vocational religious education. Diplomas to graduates who studied for four years were presented by the mufti of Tatarstan and the director of the madrasah “Muhammadiya” Kamil hazrat Samigullin.

This year, 63 people received diplomas – 23 men and 40 women – they mastered Sharia subjects and expressed their readiness for religious service. Men were awarded the qualification of “imam-hatyb and teacher of the fundamentals of Islam”, and women – “mugallima”. Ustazу greeted new ready-made specialists with instructions and good wishes.

The very first to congratulate them was the mufti of Tatarstan, the director of the madrasah Kamil hazrat Samigullin. He urged them not to stop there, to comprehend knowledge throughout their lives, like the famous Islamic scholars, and also to apply knowledge in life – to do good deeds. “Benefit Tatarstan, our people and Islam,” summed up the mufti.

Shakirds came to study from different regions of Russia – from Samara, Sverdlovsk, Chelyabinsk, Saratov, Krasnoyarsk, Moscow, as well as from regions and cities of Tatarstan. All of them studied Islamic sciences in the Tatar language for 4 years and became specialists, imams, teachers teaching the basics of Islam in the Tatar language in the regions where they live. Students of the correspondence department during their studies passed exams in 34 subjects, they were taught by 8 mentors.