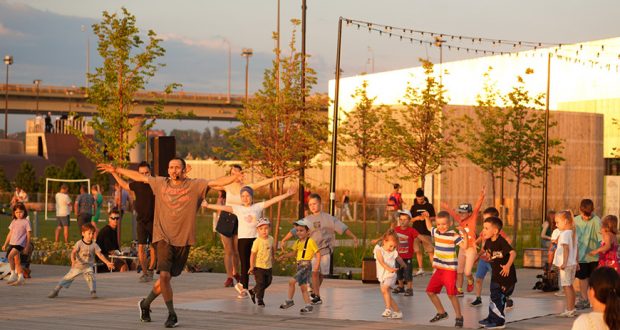 The next lesson of the project “Hәrәkәttә – bәrәkәt” will be held on August 9 on Bauman Street and will be dedicated to the Tatar dance.

On the eve of the Kazan extreme park “Uram” a master class on break dance in the Tatar language was held. Rushan Ildrkhanov, coach of the professional breaking school, participant of international and Russian championships, and Ruslan Sheikhutdinov (Bboy Liquid), winner of all-Russian and international festivals in individual and team competitions, conducted the next lesson within the framework of the project “Hәrәkәttә – bәrәkat”.

During the master class, children and their parents were taught basic breaking movements. According to Rushan Ildrkhanov, in one lesson you can learn how to make a simple bunch, starting from which you can further develop your skills. “Breakdancing is a dance that provides many opportunities both in terms of physical development and mental development. For example, I teach children English with the help of breaking elements. They begin to slowly memorize numbers, words. Thanks to breakdancing, you can develop self-confidence, learn how to behave in front of the public, improve acting skills, ”said the coach.

As part of the lesson, everyone who wished to learn such breaking movements as “two steps”, “three steps”, “six steps”, “tortoise”, “salsa step”, “cross step”, “baby freeze”, shoulder stand . At the end of the lesson, the visitors consolidated their movements and had a jam – they showed their skills in turn. “I like the Khәrәkәttә – bәrәkәt project because it is held in the Tatar language. I always come with my family, invite friends. As a child, I really wanted to do breakdancing. The opportunity to bring my little child was a happiness for me, ”said the young mother Zuleikha Kamalova.

The next lesson within the framework of the project “Khәrәkәttә – bәrәkәt” will be held on August 9 on Bauman Street and will be dedicated to the Tatar dance, the department for the implementation of national policy in the field of linguistic culture of the Executive Committee of Kazan reports. The schedule of master classes can be tracked in the Telegram channel.

Recall that in Kazan, the events of summer sports and creative activities of the project “Khәrәkәtә – bәrәkәt” started in 2021. Last year, 14 master classes were held. This year, at the first lesson on the embankment of Lake Kaban, 500 Kazan citizens attended a master class on the basics of the Tatar dance “Yarmak vagy”. At the second lesson, the citizens of Kazan learned to tap dance. The third master class, held in the Gorkinsko-Ometevsky forest, was devoted to aerobics, and the fourth one on Bauman Street was dedicated to the Tatar folk dance. Meetings will be held until September. The organizer is the City Hall of Kazan.