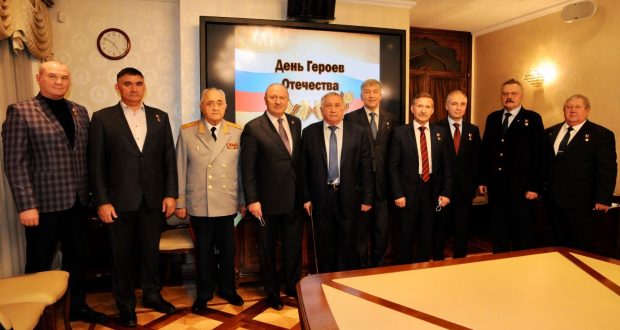 A meeting dedicated to the Day of Heroes of  Fatherland was held at the Plenipotentiary Representation of the Republic of Tatarstan in the Russian Federation.

It was attended by eight Heroes of Russia, who are members of the Officers’ Club, created at the Plenipotentiary of the Republic of Tatarstan in the Russian Federation. The event was attended by Vladimir Alimov, Marat Alykov, Rafik Ihsanov, Rustem Klupov, Vener Mukhametgareev, Vadim Makarov, Sergey Tulin, Igor Urazaev.

He congratulated the Heroes of Russia on the holiday, and also stressed that each participant in the meeting is an example of courage and heroism, especially for young military personnel.

Ravil Kalimullovich told the meeting participants about the events of the Plenipotentiary Mission that took place in Moscow in the year of the 100th anniversary of the TASSR and the 75th anniversary of the Great Victory. In the Moscow region, 11 first secretaries of the TASSR and 6 chairmen of the Council of People’s Commissars and Council of Ministers (including in the common graves of the repressed) were buried, the representatives of the Representation  visited their graves, laid flowers.

In 2020, the Representative office congratulated more than 100 Muscovites who are the same age as the republic, that is, who have stepped over the centenary. In August, members of the Officers’ Club took part in the opening ceremony of a monument to General of the Army Makhmut Gareev at the Federal Military Memorial Cemetery. The participants of the meeting saw on the screen video recordings of Makhmut Akhmetovich’s performances at the meetings of the Officers’ Club. Again they laughed at his jokes, but without the legendary general himself.

Ravil Kalimullovich also spoke about the participation of  President of the Republic of Tatarstan R.N. Minnikhanov in the ceremony of laying flowers at the Tomb of the Unknown Soldier and the unveiling of a monument to illegal intelligence agent Iskhak Akhmerov, on the trip of the Tatarstan delegation to the Khmeimim airbase, where dozens of servicemen from the republic serve. It should be noted that as part of the delegation, Syria was visited by three Heroes of Russia – representatives of the Officers’ Club.

We remind  that the Day of  Heroes of  Fatherland has been celebrated in Russia since 2007 every year on December 9. On this day, our country honors the Heroes of the Soviet Union and the Russian Federation, who have shown valor and courage on the battlefields, fearlessness in peacetime, courageous and strong-willed people.