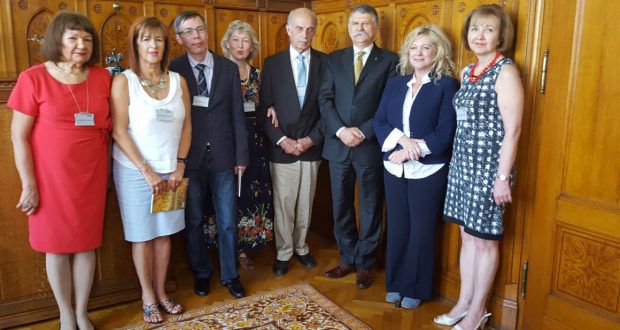 On June 17, the House of Culture of the 17th district of Budapest with great success hosted another presentation of the book  by  one of the classics of Tatar literature, Ayaz Gilyazov, “Let’s pray” (“Yegez, Ber Doga”).

The presentation  has been attended by  the Hungarian MP s Monica Budai, specially for the participation in this significant event at the invitation of the Tatar society “Elifba” a delegation of Tatarstan represented by the associate professor of the Kazan Federal University, a researcher of the literary heritage of Ayaz Gilyazov Milyausha  Habudtinova and  professor of the University of Justice Aidar Khabutdinov arrived.

The hall was full, it is surprising that the theme of the Gulag  may so unite people. There were press and television of Budapest. The book was translated into Hungarian and published in a record short time in two and a half months thanks to, first of all, the great enthusiasm and professional support of Arpad Galgotsi, a laureate of the Translators’ Prize. Jozsef Attila, Chevalier of the Order of Friendship of the Russian Federation and the selfless help of his wife Katalin.

In the difficult years described in the novel, Arpad Galgotsi was friends with the author and became a prototype of some characters of this work. The book was published with the support of the Ministry of Human Resources of Hungary, which provided the public fund “Gulag” with money for the translation and publication of this book.

As you know, 2016 was celebrated in Hungary as the Year of the Gulag and as the 60th anniversary of the 1956 revolution. The publication of the book by Ayaz Gilyazov in February 2017 is very symbolic for this date. At the presentation, Milyausha  Habutdinova presented honorary diplomas of the Ministry of Culture of the Republic of Tatarstan to the main organizers. The delegation of Tatarstan together with Hungarian colleagues was received by the President of the Hungarian Parliament, Laszlo Kevir.