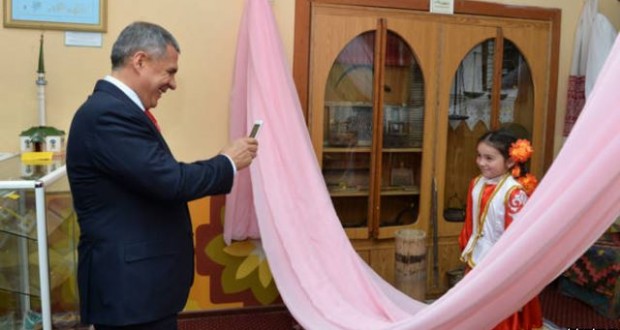 Recently, the President of Tatarstan Rustam Minnikhanov visited the Center of National Education in Kazan. We remind that in this capacity from September 1 this year for the first time in the country the Tatar gymnasium №2 named after Sh.Mardzhani has begun working.

Head of the republic was accompanied by Deputy Prime Minister – Minister of Education and Science Engel Fattakhov, Mayor of Kazan Ilsur Metshin, Chairman of the Executive Board of the World Congress of Tatars Rinat Zakirov, chairman of the RT State Council Committee on culture, science, education and national issues Razil Valeev and others.

The Center of National Education unites the kindergarten “Balakay”, gymnasium №2 at Kazan Federal University and the School of Music №32.

Rustam Minnikhanov examined the Center for National Education Museum after Shigabutdin Marjani, the exhibition of sculptures by Backy Urmanche, the museum “Echo of the

XX century”, a creative studio, sports hall where pupils are engaged in the Tatar national school of wrestling. The President has also been featured creative room with the Tatar national songs and dances. He also saw opened after renovation the school’s cafeteria where Rustam Minnikhanov even tasted cakes, which are cooked for pupils.

As director of the Center of National Education Kamaria Khamidullina told the reporters, at the center of today, 600 children are taught. The main feature of the Center of National Education – an implementation of the continuity of the educational process in native language on the basis of the history, traditions and culture of the people through the implementation of the relationship “kindergarten – school – higher educational institutions.”

This educational organization will be a resource center for the Ministry of Education and Science of the Republic of Tatarstan, the Executive Committee of the World Congress of Tatars, Kazan (Volga Region) Federal University on preservation, synthesis and dissemination of experience on organization of learning in native language in order to assist the regions of Tatarstan and Russia.

The main objective of the Centre of National Education is to preserve and develop the traditions of national education, language, culture and history of the Tatar people.