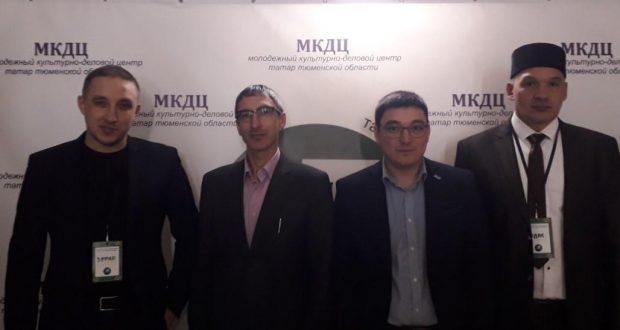 Project of Tatara Tyumen: one year of fruitful work

On November 24, young, proactive, talented, aspiring to build an active life position young people of the project  Tatars of  Tyumen  celebrated their first birthday. All guests at the beginning of the event were welcomed by the chairman of the MKDC Tatars of Tyumen Zufar Mukhametshin and one of the founders of the Tatars of Tyumen project Ilyar Makhmutov.

The Tatars of Tyumen actively cooperate with the Religious  Administration of Muslims of the Asian part of Russia.

Tatars of Tyumen were congratulated on the anniversary of their foundation: Amir Hazrat Baldin, Deputy Chairman of the Tyumen Kazuyat DUMACHR, Ruslan Hazrat Sadrutdinov, Imam of the Matmasov Mosque, and Khazrat Makhmutov, Imam of the Yalutorov Mosque. For the year of the project Tatars  of Tyumen has done a lot. “Tatars of Tyumen” help children to get used to the big city, not to lose the value and significance of their roots, to preserve the best traditions by which they lived in their own family – at home. They would  organize and conduct sports in volleyball, football among the youth of the Tyumen region.