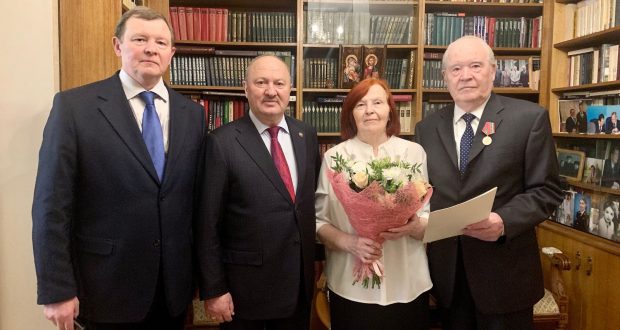 The award ceremony took place in the house of the Demidovs family in  presence of his wife Elizaveta Ilyinichna and son Yuri Nikolaevich. Nikolai Demidov is 87 years old.

The medal was awarded “For a significant contribution to strengthening the socio-economic potential of the Republic of Tatarstan, interethnic and interfaith peace and harmony,  preservation and enhancement of cultural and spiritual heritage, high achievements in professional and social activities.”

“I am honored to present you with this award today. You have done a lot for our republic, for the country as a whole. You  have  brought up wonderful sons. The Demidov dynasty is one of the most powerful in our republic. We are proud of you! ”Ravil Kalimullovich emphasized.

“I thank Rustam Nurgalievich for the high award, for your attention to me. My entire adult life is connected with my native Tatarstan. Our republic has never been lagging behind. Under the Soviet Union, and now Tatarstan is in the forefront. From the 50s to the 70s, there was a unique period when several all-Union shock construction projects were carried out on the territory of one republic. I say this to the fact that the Tatarstan people have always been lucky to have leaders. For decades I worked hand in hand with Fikryat Akhmedzhanovich Tabeyev, with Mintimer Sharipovich Shaimiev, and now with Rustam Nurgalievich Minnikhanov. These are true statesmen, ”Nikolai Ivanovich said in his reply.

Nikolai Demidov conveyed special greetings to his fellow countrymen in the Laishevsky district of Tatarstan. “I was born in the village of Srednee Devyatovo into a large peasant family. He was the eldest son, his parents raised eight children. None of us let our native Tatarstan fail, neither brothers and sisters, nor sons, ”he said.

Nikolai Demidov presented Ravil Akhmetshin with the book “Warrior of the Fatherland” – a documentary story about him.

Nikolai Ivanovich Demidov has been connected with Tatarstan for more than 20 years of work biography. After graduating from the law faculty of Kazan State University, he worked as an assistant to the prosecutor of Yelabuga, headed the Komsomol, later – the city party organization, worked as  chairman of the district executive committee in Nizhnekamsk.

Nikolai Demidov headed one of the leading ministries of the Tatar Autonomous Soviet Socialist Republic – the Ministry of Internal Affairs in difficult years for the republic – from 1978 to 1983. Then he was invited to Moscow for the newly created position of Deputy Minister of Internal Affairs of the USSR (1983-1991) and at the same time head of the Main Directorate of the BHSS.

In the critical 90s, General Demidov was appointed head of the Institute for Advanced Training of Police Workers, and a little later – head of the Academy of the Ministry of Internal affairs of Russia.

The sons and even grandchildren of Nikolai Demidov continued the path of their father and grandfather.

Yuri Nikolaevich – Lieutenant General, Doctor of Law, Professor, Head of the Office of the State Duma Committee on Security and Anti-Corruption.

The eldest son Viktor Nikolaevich Demidov is  chief federal inspector for the Republic of Tatarstan, is a Doctor of Law.