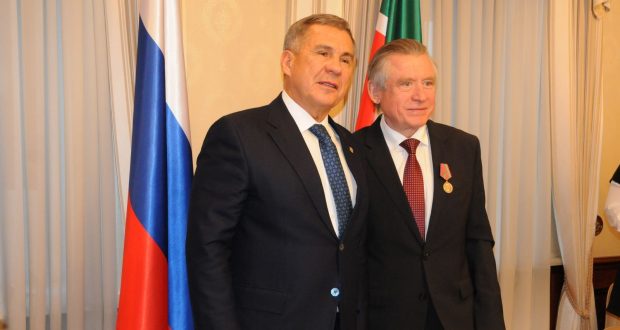 Welcoming the participants of the event, Rustam Minnikhanov noted that 2020 is special for Tatarstan – the republic is celebrating its 100th anniversary. By the decree of   President of Russia, this event acquired the status of a federal holiday. “Despite the coronavirus pandemic, we are celebrating a century with dignity. A number of large facilities have been opened in the republic. Work in this direction keeps going . It is planned to open a new cancer center, two ice palaces, several sports facilities and kindergartens. The final meeting is scheduled for December 18, then we will sum up the results, ”the President of Tatarstan said.

Rustam Minnikhanov stressed that over 100 years the republic has passed a long way of development: from an agricultural region to one of the country’s industrial centers. “The most important thing is the people who created the foundation of our republic. Today I would like to mark  your services to the Republic of Tatarstan, ”added Rustam Minnikhanov.

For a significant contribution to strengthening the socio-economic potential of the Republic of Tatarstan, interethnic and interfaith peace and harmony, preservation and enhancement of the cultural and spiritual heritage, high achievements in professional and social activities, the medal “100 years of the formation of the Tatar Autonomous Soviet Socialist Republic” was awarded to compatriots who contributed significant contribution to the development of the Republic of Tatarstan.

For a great personal contribution to the formation and development of the oil industry of the Republic of Tatarstan and many years of fruitful work, Rustam Minnikhanov awarded the medal “In commemoration of   production of three billion tons of oil in Tatarstan” to Elena Sapronova, General Director of SINTECH LLC

At the end of the event, Rustam Nurgalievich thanked the participants of the meeting for having gathered at a difficult time. “I am very glad to see you all, in Tatarstan I will convey my regards from you,” he added.