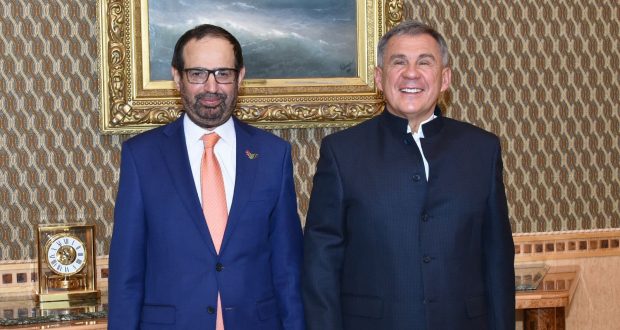 The World Council of Muslim Communities was established in 2018. The headquarters are located in Abu Dhabi (UAE). The Council’s activities are aimed at assisting  integration processes while preserving  national and religious identity of Muslims living in multicultural and multinational countries. The Council includes over 550 leaders of political, scientific and religious communities from over 140 countries, including Russia.

The President of Tatarstan welcomed   the guests and congratulated them on  national holiday of the United Arab Emirates – Independence Day. “On this significant day, I want to wish peace and further prosperity to your state,” he stressed.

Rustam Minnikhanov noted that in Tatarstan and Russia as a whole, the necessary conditions are being created for  revival of spirituality. Currently, there are almost 1,500 mosques in Tatarstan. Much attention in the republic is paid to the sphere of Muslim education. So, in 2017, the Bulgarian Islamic Academy was opened, designed to revive the traditions of the domestic Islamic theological school. The Academy is already actively cooperating with the World Council of Muslim Communities.

Rustam Minnikhanov emphasized that a lot of work is being done by the Strategic Vision Group “Russia – Islamic World”. Its activities are aimed at further rapprochement of Russia with Muslim states on a cultural and civilizational basis, strengthening mutual understanding and trust between peoples, as well as countering the spread of ideas of extremism and terrorism.

During the meeting,  President of Tatarstan expressed hope for the further development of successful and fruitful cooperation with the World Council of Muslim Communities in strengthening human and spiritual values ​​in the world.

As part of his visit to Kazan, Mr. Ali Rashid Al Nuaimi will visit the Khuzur publishing house, the Galeevskaya mosque, the residence of the Religious  Board  of Muslims of the Republic of Tatarstan, the Muhammadiya madrasah, the Yardam rehabilitation center, and will also give a lecture for students of the Russian Islamic Institute.