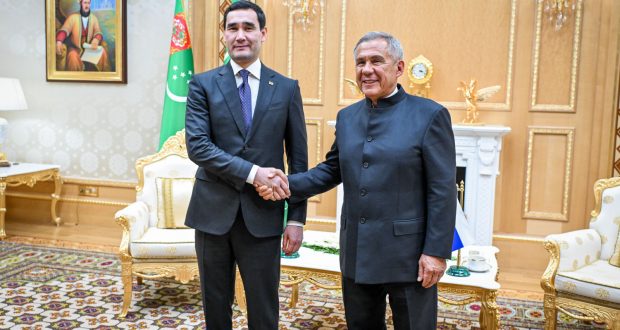 On January 20, during his working visit to Turkmenistan, Tatarstan President Rustam Minnikhanov took part in a ceremony of laying a foundation stone of a new mosque in the city of Arkadag.

The mosque, where 5.5 thousand people will be able to pray at the same time, will be built in the new administrative centre of the Akhal province. The construction of Arkadaga – the first «smart city» in the country was launched in 2019. About 70 thousand people will live there.

During the meeting with representatives of local media, Minnikhanov congratulated the people of Turkmenistan on the start of construction of the main mosque of the city of Arkadag.

Tatarstan President emphasized that the Tatars and the Turkmens are fraternal peoples. “We have deep historical and spiritual-cultural ties. Tatar and Turkmen languages, as well as our traditions and customs are very similar. We see how Turkmenistan is changing from year to year. It would not have been possible without wise leadership. Tatarstan is very happy with your success!” Minnikhanov said.