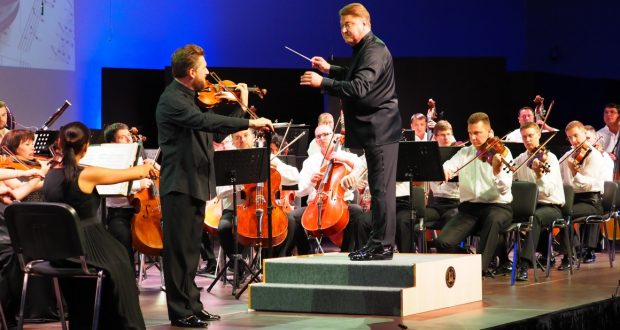 Tatar classical music performed at the Festival of Russian Regions in Sochi
August 27,  2019

Classical Tatar motifs of the Second Symphony by Nazib Zhiganova were heard by the Sochi audience at the Festival of Russian Regions. The work by the prominent Tatar composer was performed by the State Symphony Orchestra of Tatarstan under the direction of the People’s Artist of Russia Alexander Sladkovsky, the press service of the SSO RT reports.

“Our goal is to enrich and promote national music not only on the scale of the republic and Russia, but also the whole world. Bringing Tatar music to the international level is what we strive for, ”said Alexander Sladkovsky, People’s Artist of Russia.

Also at the festival, the orchestra played works by Tchaikovsky and Beethoven, and as a soloist, the famous violinist,a  laureate of the XV International Competition im. Tchaikovsky Pavel Milyukov.

The music of Vivaldi, Haydn and Saint-Saens together with Tatarstan musicians was performed by the laureates of the All-Russian competition of young musicians “Constellation”: Andrey Taranukh, Danila Vladyko, Maria Arteeva, Varvara Petrova. This joint performance will inspire novice performers to succeed in music, says Hans-Joachim Fry, Artistic Director of the Talent and Success Foundation.