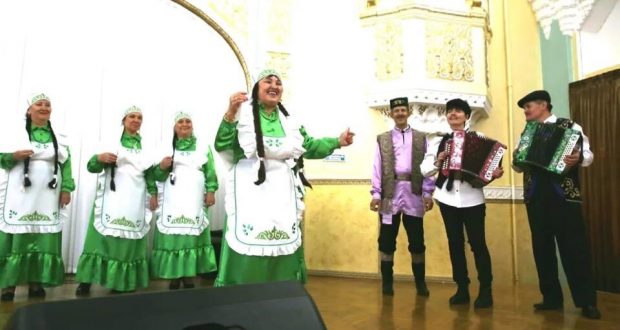 The first concert was dedicated to the 95th anniversary of the village of Kazanka. Many of its residents gathered on the site in front of the club, who were awarded with diplomas, letters of thanks and gifts for their many years of dedicated work.

Amir Gimadislamovich Gareev, President of the NGO “Regional Tatar National Cultural Autonomy of the Novosibirsk Region” addressed the meeting with a welcoming speech.

All the songs of the artists, performed with great dedication, caused a warm response from the audience – they sang folk tunes dear to their hearts, danced, throughout the concert, a smile did not leave their faces.

Financial support for the anniversary holiday was rendered by Ibragimov Renat Gayazetdinovich, head of the Novosibirsk construction company. And a few years ago he built a mosque in the village of Kazanka, which became a place of attraction and a symbol of spiritual rebirth.

The tour path to Yurt-Oru, an ancient settlement of Chat Tatars, ran through the village of Yurt-Akbalyk. All the artists were invited to dinner at his home by a hospitable Ramil Aby.

The concert in the village of Yurt-Ora took place on the territory of the national cultural and historical museum complex “Chatsky Tatar Manor”. It was opened on June 30, 2018 with the assistance of the Government of the region.

Those who came to the concert with warm applause greeted each song, and for a long time did not want to part with  the artists after its completion.

All the tour artists expressed their gratitude to the sound engineer Askhat Shaimardanov, who ensured  high-quality sound of music during open-air concerts, and to the driver Mikhail Yankevich, with whom everyone felt safe and secure on the roads of the region.