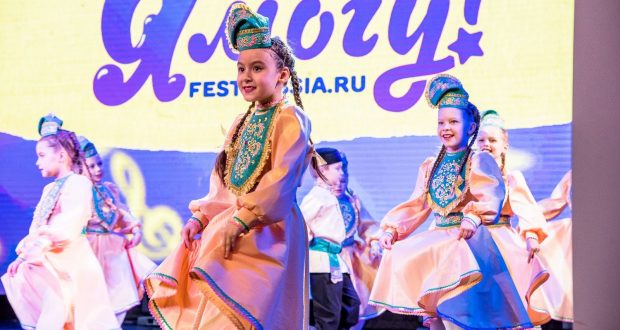 The children’s vocal and choreographic studio at the State Song and Dance Ensemble of the Republic of Tatarstan won first place in the Folk Dance nomination of the 46th Kazanskiye Uzory  (Patterns) International Festival-Competition of Children and Youth Creativity. Also, young artists took second place in the “Children’s Dance” nomination and a special diploma of the “For Artistry” competition.

As  artistic director of the ensemble, People’s Artist of the Republic of Tatarstan Airat Khametov said, the victory of the pupils of the studio was a real present for the ensemble for the New Year. “We are very grateful to the teachers of the studio Alfia Shilyaeva and Artur Khababutdinov, under whose strict guidance the guys were able to achieve results in a fairly short time, and most importantly, to join our ranks and already start performing with professional artists. … It was decided that from now on, the children of the studio will be involved in most of the ensemble’s productions. I am sure that young talents will be able to conquer the audience at our concerts, ”he said.

We remind you that last week the premiere of the studio’s pupils took place on the big stage. Young artists performed at a solo concert of the State Song and Dance Ensemble of Tatarstan at the Theater named after G. Kamaly in the framework of the presentation of the new program “Tugan silt” (“Native side”). The children performed a Tatar dance, causing thunderous applause from the audience.

As the head of the ensemble, Yuri Zhukov, said in an interview with journalists, the children’s studio at the ensemble was revived in September this year.

“We have revived a children’s studio for children from 6-8 years old. We now have 50 small children. We do not have a task to recruit a large number of children, we focus on quality. Pupils of the studio study the original national Tatar culture. The main goal of the studio is to search for gifted and talented children, as well as to help them in professional self-determination. We are the launching pad for such talent. Let me remind you that we had a children’s studio for a long time. It existed with us from 2004 to 2013. And it is very pleasant to see the result when graduates of those years are now working in our ensemble, ”noted Yuri Zhukov.