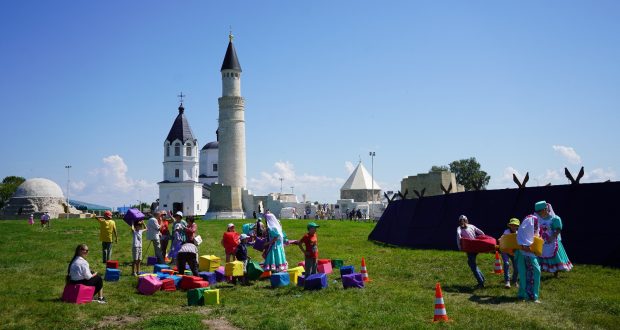 On July 22-23, 2022, the II International Ethnocultural Festival “Aga Bazaar” was held on the territory of the Bulgarian Museum-Reserve.

“Aga Bazaar” brought together creative teams, solo performers and instrumentalists on its site, popularizing folk culture. Here were presented unique handicrafts, objects of arts and crafts from the best masters of the Republic and regions of Russia. Everyone was able to take part in interactive programs and training seminars that tell about the history of the development of ethnic culture in various areas: in music, clothing, traditional cuisine.

At the CHIREM site, a village of healers of the peoples of the Volga region was presented, where experts in traditional medicine talked about medicinal herbs, the traditions of Tatar tea drinking, the proportions and procedures for brewing tea of ​​the Turkic, Finno-Ugric and Slavic peoples. The guests were able to retire from the bustle of the city and plunge into a shady, quiet, green corner on the banks of the Volga.

At the festival, there was also an activity for children, especially for the youngest participants of the festival, a playground “UEN FEST” was organized. The children shot from a bow and went through a straw labyrinth. For lovers of less active activities, there were platforms with master classes, board and intellectual games.

At one of the venues of the holiday, a music festival of children’s folklore groups “Monly Tamchy” (“Ringing Drops”) was held. Young representatives of the indigenous peoples of Tatarstan showed fragments of folk rituals, performed samples of song and musical folklore of various genres, and visitors also heard the creative experiments of the DERREU FOLK SOUND ethno-music laboratory, where songs were performed in Russian, Tatar, Chuvash and Kryashen languages.

The ethno-cultural festival was decorated with the music of professional and amateur groups of the festival of Tatar folklore “Iske Kazan tugarak ueny”. The participants of the concert introduced the audience to Tatar folklore.

The central venue of the festival was the stylized medieval Bulgarian market “AGA BAZAR”, where trading stalls with unique handmade goods were presented, as well as thematic areas, craft workshops with creative classes in arts and crafts were organized.

Artists of the IsTElek creative association took part in the evening concert program, folk-fusion compositions, various directions of electronic music in symbiosis with an ethnic component were performed. The headliners of the festival were the performer of the most famous TikTok challenge from Kazakhstan with the song “Ash-ash” Zholdasbek ABDIKHANOV and Aleks Ataman.

In the evening, the participants and guests of the festival were able to visit an open-air cinema and watch a feature film created on the basis of the mythology of the Tatars “Water”.