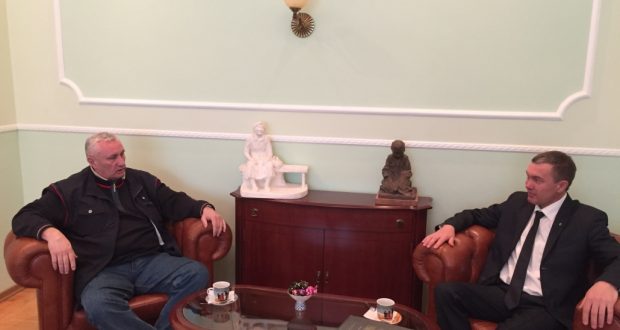 The Permanent Representative of the Republic of Tatarstan in the city of St. Petersburg and the Leningrad Region Renat Valiullin held a meeting with the Head of the North-West Scientific Center named after I. L. N. Gumilev  Shamil Ahmetshin.

Sh. Akhmetshin presented his regular book “Ulany (Lancers). Valiant sons of the Great Steppe “, which was published as part of the book series” Tatars in the Service of the Fatherland “.

Within the framework of the meeting, the organizational issues of the forthcoming presentation of this edition were discussed.

The book tells about the history of light cavalry from its appearance in the army of Genghis Khan, spread across the Eurasian continent, division into separate types of troops according to tasks, and separately, about the development of Ulan as a kind of light cavalry in the Russian army. The lancers distinguished themselves during the Patriotic War of 1812, became famous during the campaigns of Suvorov and the heroic defense of Sevastopol.

For several years, Sh. Akhmetshin has been actively studying the establishment of a little-studied historical material, revealing the role of the Tatar people in Russian history, and his contribution to the formation and strengthening of Russian statehood and culture. Based on the materials of the research, a series of books “Tatars in the Service of the Fatherland” is being created.