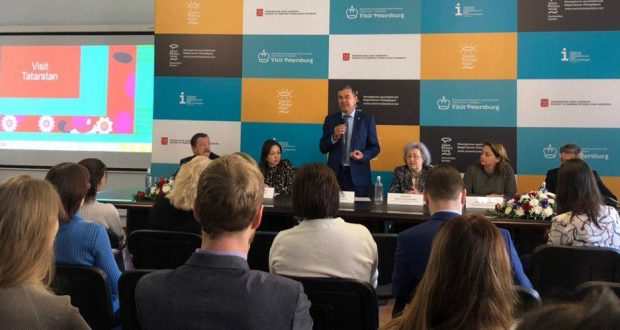 On October 30, the  presentation of the tourism potential of the Republic of Tatarstan was held at the City Tourism and Information Bureau of St. Petersburg.

The purpose of the event was  development and strengthening of tourism relations between St. Petersburg and the Republic of Tatarstan,  expansion of cooperation between business circles and  implementation of joint projects in various fields. The two regions are linked by friendly ties.

The event was attended by the leaders and managers of tour operators and travel companies of St. Petersburg and the Republic of Tatarstan, interested in cooperation, media representatives.

The guests were greeted by:  Permanent Representative of the Republic of Tatarstan in the city of St. Petersburg and the Leningrad Region, Renat Valullin, and  head of the State Public Institution “City Tourist Information Bureau” Nadezhda Petrova.

The presentation began with a speech by the representative of the State Committee for Tourism of the Republic of Tatarstan, Dinara Khismatullina, who presented the tourism opportunities of the republic and the inter-regional tourist route “Palaces and Mosques”, then the presentation of the tourist potential of the city of Kazan took place, with which was introduced  by  Elena Ilkun, head of the group of companies TM Travel Bureau.

Further, representatives of travel companies from the city of Kazan spoke about their travel routes and tours.

After the introductory part, a round table discussion was held entitled “Development of inter-regional relations for formation and creation of new and priority types of tourism”, with the participation of representatives of the tourism industry of St. Petersburg and the Republic of Tatarstan, where they discussed the development of intra-regional  and international cooperation in the field of tourism and ways of interaction between Kazan tour operators and St. Petersburg.

As part of the event, agreements have been  signed between the Permanent Mission of the Republic of Tatarstan and the Event-Travel Holding Favorit, as well as with JSC St. Petersburg Medical Tourism Agency on information cooperation between the two regions.

At the end of the event, an exchange of contacts between interested parties took place and preliminary tourism projects for further work were proposed. Guests of the event showed great interest in this presentation ..

Tatarstan is a region of peace and harmony. Here you can get acquainted with the objects of Muslim and Orthodox culture, visit the oldest mosques and churches, which for many years peacefully have coexisted on the same territory. If you want to be in the East and in the West at the same time, then you certainly need to be in Kazan. The “third” capital of Russia has historically absorbed the flavor of two different world cultures – the wise East with its love of fairy tales, magnificent decoration and a rational West with its business acumen and vigorous economic activity. Kazan, with its impressive Kremlin, mosques, churches and rich museums, is a unique attraction of tourist routes along the Volga and is included in the list of world heritage cities, awarded with diplomas and a UNESCO medal.