Home / News / The sixth season of the “School of One Day” is closed: fifty people have been taught the basics of namaz and Islam 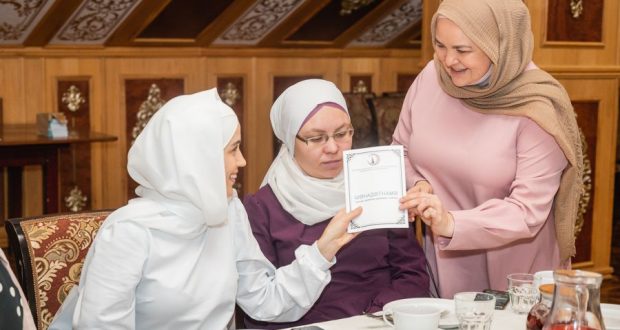 The sixth season of the “School of One Day” is closed: fifty people have been taught the basics of namaz and Islam

The sixth season of the “School of One Day” is closed: fifty people have been taught the basics of namaz and Islam

On December 5, on the 20th day of the month Rabi al-Akhir (December 5), at the national complex “Tugan avylym”, the ceremonial closing of the sixth season of the project “School of one day” was held by the DUM (Religious Board of Muslims)  RT. This season, due to the pandemic, a limited number of participants – about 50 people – were able to take part in the project.

At the beginning of the celebration, Aigul khanum Biktimirova,  head of the department of social development of the SAM RT, addressed the participants and ustaz of “Sh1D” with a welcoming speech. In her speech, she thanked the volunteers and all caring people who helped in this charitable cause.

Then the imam-khatyb of the Kazan mosque “Sulakh” Timergali Hazrat Yuldashev addressed the disciples with kind words and wishes, who gave the participants valuable instructions and read vagaz about the concept of “the mercy of Allah Almighty”. In addition, the students of the “School” were able to ask the Hazrat their questions.

The last day of the “School” classes ended with the final control of the students’ knowledge. It was held in an interactive manner. After the “exam”, the closing ceremony of the “School” took place. Each participant was presented with a Certificate of Completion of the School of One Day.

After the meeting, a festive majlis, “Korun ashy”, took place.

“One Day School” allowed the participants to quickly and effectively master the skills of reading namaz and the basics of Islam for 7 lessons. Thus, for several weeks on Saturdays, the listeners received the skills of performing namaz, learned about the basics of Islam, learned the culture of performing dua, attended master classes on tying a scarf, etc.

On the first day, each listener was presented with a workbook “Islam. The first steps”. It contains the most important knowledge for every Muslim, which is presented in a language that is most understandable for a wide range of people.

The project was implemented specifically for beginners who are taking their first steps towards the study of Islam. The training was conducted free of charge in Tatar and Russian, separately for men and women. There were also some surprises: after each lesson, the participants of the One Day School were provided with gifts.

“The School of One Day” project was first implemented by the muftiat in 2018 as part of the Dagwat’s activities. This season of the project has become the sixth. In total, about 550 people studied at the courses, in fact, they became practicing Muslims.