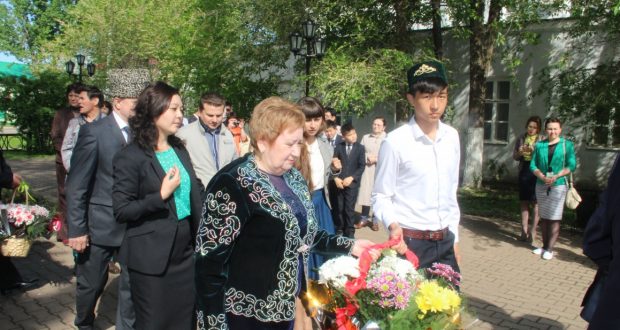 The year of 2016 in the activities of the NGO “Tatar Cultural Centre” of the West Kazakhstan region has been declared the Year of Tukai. As part of this year a series of events dedicated to the 130th anniversary of Tatar poet Gabdulla Tukai and the 120th anniversary of his arrival in Uralsk will be held.

As part of this year May 19-20, 2016, celebrations dedicated to the 130th anniversary of Tatar poet Gabdulla Tukai and the 120th anniversary of his arrival in Uralsk were held. The main events of these activities were the round table “Uralsk in life and work of G.Tukai” and international scientific-practical conference “The World of Tukai: philosophy, aesthetics, language.”

In celebration of the anniversaries delegations came from Astana, Almaty, Republic of Tatarstan (Kazan). Among the honored guests were scientists, researchers, Tukai specilasits, linguists, representatives of creative intelligentsia of Tatarstan, representatives of the International Academy of the Turkic Council and the Assembly of People of Kazakhstan, members of the NGO “Association of Tatar and Tatar-Bashkir cultural centers” Idel “.

May 19 at the monument to Gabdulla Tukai a rally took place. The event was attended by Mayor of the city Nariman Turegaliev, delegation from Tatarstan, public figures, students and schoolchildren.

In his welcoming remarks, Deputy Chairman of the Regional Assembly of People of Kazakhstan, Head of the Secretariat of the ANC WKO Gaisa Kapakov, said that it is impossible represent Tatar culture without the works of this great artist of his time. Gabdulla Tukai lived a very short life – only 27 years old – his name has been immortalized in his works.

– For more than a century G.Tukaya heritage, works of the founder of Tatar culture translated into many languages, and we western kazakhstaners are very proud of the fact that his formation as a poet took place in Uralsk. Personality of Gabdulla Tukai was multifaceted: he was a philosopher, a politician has always sought to ensure that benefits the society. Tatar poet loved the Urals, the nature of our region, and this love is embodied in his poetic works, – G. Kapakov mentioned.

In her speech, the poet, member of the Writers’ Union of the Republic of Tatarstan, RT Honored worker of arts Shamsiya Zigangirova articulated great love of the people to an outstanding poet.

At the House of Assembly of the people of the West Kazakhstan region, a round table: “Uralsk in G.Tukai life and work” was held, on the role of Uralsk in the works of G. Tukai and his brilliant legacy. The event was attended by the Deputy of the oblast Akim Marat Togzhanov. Welcoming the guests, he thanked them for their participation in the anniversary events. At the same time M. Togzhanov said that Uralsk – it is the birthplace of poetry of Gabdulla Tukai, and therefore the Kazakh people cherish the memory of the life and work of this

Tukai end the year in the month of December the celebration of the 10th anniversary of the House-Museum G. Tukai.

Thanks to the assistance and financial support of patrons from Kazakhstan and Tatarstan, commemorative events dedicated Gabdulla Tukai are held on a high cultural level.