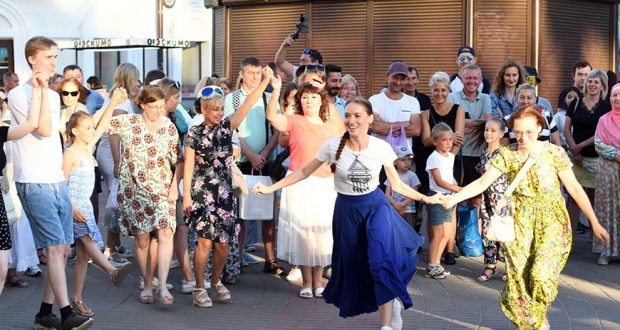 On Bauman Street, Kazan will play the game “Zalida”

On August 9, on Bauman Street, Kazan citizens and guests of the city will play the Tatar musical and dance game “Zalida”. The next open event of the project “Hәrәkәttә – bәrәkәt” will be held with live music.

During the game, everyone will be able to learn the basic movements of the Tatar folk dance. The lesson will be held by the laureate of international competitions and festivals, teacher-choreographer of folk dance Saida Minubayeva and master of flamenco dance, choreographer Gulsina Galimullina. Musical accompaniment will be provided by accordionist Gazinur Ravilov, multi-instrumentalist Aidar Abdrakhimov, master of playing the jew’s harp and throat singing Fanil Vildanov.

“Zalida” is a popular Tatar music and dance game, during which the bayanist plays in the middle of the round dance, and the rest of the participants sing and dance around him. Previously, “Zalida” was accompanied by the execution of funny punishments, the participants could test their resourcefulness, dexterity and speed. Young people liked to play the game “Zalida” in the evenings.

All participants of the master class will work in tandem, so the musicians themselves will join the game. Button accordion and jew’s harp will provide rhythm and vigor to the game.

The master class will begin at 19:00 in front of house number 24 on Bauman Street, the department for the implementation of national policy in the field of linguistic culture of the Executive Committee of Kazan reported.

Recall that in Kazan this year in the public spaces of Kazan, 5 summer sports and creative classes of the project “Khәrәkәttә – bәrәkәt” have already taken place. At the last of them, children and their parents learned the basic movements of breaking. Project meetings will be held until September. In the summer season last year, 14 classes were held.