Home / Slider / Tinchurinsky Theater will close the 88th season with the premiere of the opera “Al yaulyk, zangar shal” 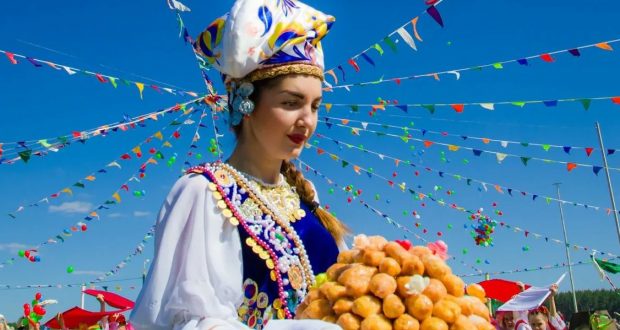 Tinchurinsky Theater will close the 88th season with the premiere of the opera “Al yaulyk, zangar shal”

The Tatar State Theater of Drama and Comedy named after Karim Tinchurin will close the 88th theater season with the premiere of the opera “Al yaulyk, zangar shal”. The production is the result of the work of the Umai women’s laboratory.

According to the chief director of the Tinchurinsky Theater Tufan Imamutdinov, the name of the performance is associated with national symbols and traditions, and the personification of a Tatar woman is a yaulyk (kerchief).

One of the acts of the opera is devoted to the problems of education and school. “Women are the main teachers in elementary school. They lead the children by the hand and present the world to them through their prism,” says the chief director. – They educate, educate and acquaint with history, ensuring the preservation of culture. Each of them has their own worldview and their own concept, therefore, getting into different situations, they behave in different ways.

It is noteworthy that the authors and artists of the opera are only women – poetesses, playwrights and composers – Alsu Sungatullina, Alina Karimova, Anastasia Kostyukova. Artist – Lilia Imamutdinova. The male staff of the theater – Ilnur Garifullin, Kamil Gataullin, Bulat Minkin, Ramil Kamalov – was involved in the director’s work on the production. The music director and conductor of the theater orchestra Ilyas Kamalov is responsible for the music in the opera, and Marcel Nuriev is responsible for the choreography.

Artists of the Tinchurinsky Theater – People’s Artist of the Republic of Tatarstan Zulfiya Valeeva, Honored Artists of the Republic of Tatarstan Lilia Makhmutova and Renat Shamsutdinov, leading actors of the theater Reseda Salyakhova and Artem Piskunov, Aisylu Musallyamova, Ilnur Bainazarov and Venera Nizamova are involved in the premiere opera, the press service of the cultural institution reported.

It should be noted that “Umai” is the first women’s laboratory in the history of the Tatar theater. It was created by the Ministry of Culture of the Republic of Tatarstan and named after the female mythical power Umai, which was glorified by the Turkic peoples in ancient times.

The premiere of the opera will take place on June 30. Beginning at 18:30, admission is by ticket.