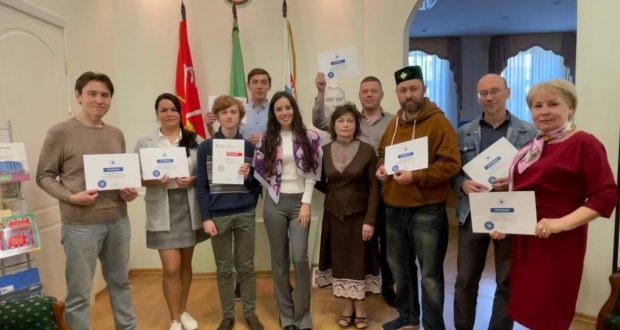 In St. Petersburg, KFU    awarded certificates of completion of the Tatar language courses

The year  2021 has been declared the Year of Native Languages ​​and National Unity in the Republic of Tatarstan. In the Educational and Cultural Center of the Kayum Nasyri Institute at the Permanent Mission of the Republic of Tatarstan in the city of St. Petersburg and the Leningrad Region, free courses on the study of the Tatar language resumed from February 27 to May. The courses were held for all comers, regardless of age and level of language proficiency. The training was conducted by the methodologist of the center of the Kayum Nasyri Institute – Alina Khairullina. It took 3 months of training according to her developed additional general developmental educational program.

Alina Khairullina, upon successful completion of her studies, presented certificates to the KFU “Tatar language. Beginner level ”to all students of the courses, including Tatar young entrepreneurs, heads of companies, students and representatives of the Tatar community.

Young listeners were also awarded with letters of thanks from the Center. The students who attended the lessons expressed their deep gratitude to the teacher Alina Khairullina and the Permanent Mission of the Republic of Tatarstan for organizing the courses and wished them to continue their studies in the next academic year, which may resume this fall.

The Kayum Nasyri Center Institute at KFU is a unique institution that promotes the Tatar language both outside Tatarstan and Russia. Today there is no such organization in any other national region of Russia. It was created in 2014. In December 2015, the Educational and Cultural Center of the Kayum Nasyri Institute in St. Petersburg was opened.

This is a virtual institute that promotes the Tatar language and Tatar culture, as well as the Russian language abroad for our compatriots, for the Tatars. The KFU staff proposed a project of the Kayum Nasyri Institute, which received support thanks to the State Program for the Preservation and Development of the Languages ​​of the Peoples of Tatarstan for 2014-2020.

The name in honor of the pre-revolutionary Tatar educator Kayum Nasyriy was not chosen by chance. He is the author of fundamental developments in the grammar of the Tatar language and in comparison with other Turkic languages. In his writings, he advocated the purity of the Tatar language from Turkish borrowings and was a supporter of the study of the Russian language by Tatar children.