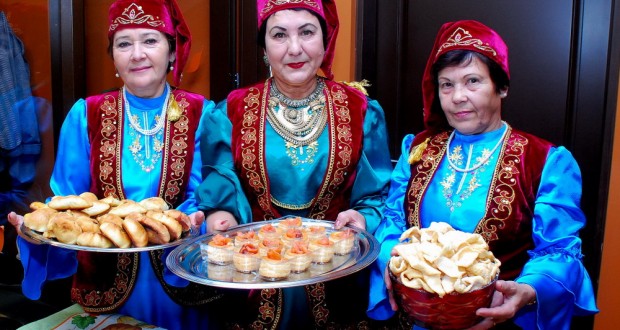 On a recent day, September 26, at the House of national minorities in Klaipeda, a festive event -10 Anniversary of Tatar community “Nur” took place. It has been opened by a perky Tatar song performed by ensemble of Tatar national song “Leysyan” (translated as “warm rain”)

Director of the House of national minorities , Elena Butkyavichene, welcomed the guests gathered for such a wonderful holiday in a cozy hall of the House: the Tatar community (chairman Ilfir Gibadullin), the Belarusian community “Krynica” (chairman Nicholai Logvin), the Azerbaijan “Azeris” (Mr. Ali aga Mammadov), the Ukrainian “Rodyna” (chairman of the center Lydia Trigub),the German (pr.Rasa Muller), and the Polish community (Irena Sontinene), having mentioned the fact that “at present time members of the community are united by irresistible desire to preserve national identity ” congratulated chairman of the Tatars community Ilfir Gibadullin on a celebratory date and wished further success to all the members of the community.

“Everyone wants to know as much as possible about their past, to strengthen spirit songs, tradition and culture … and would like to see traditions of our meetings under the arches of the House continued as long as possible”, – Elena Butkyavichene said.

Exhibition of Tatar dishes at the Hall of national minorities with traditional chak chak-and-triangles echpochmak, presentations on the screen, photo exhibitions, galleries, museum exhibits -tyubetei (male headwear) – gave a full picture of the Tatars, acquaints visitors with the Tatar cuisine , success of the community, demonstrating meetings and holidays Sabantuy beloved not only by the Tatars but also by all the townspeople.

Then, head the Department of Culture of Klaipeda Municipality Narunas Lyandraytis was invited to the scene, who mentioned that the year 2014 in Klaipeda declared the “Year of weathervanes,” and after a welcoming speech, congratulated the Tatar community , presented a gift – a weathervane. In his speech, spoke about the importance of wind vane “This weathervane unique that it consists of history-graphical characters and images that reflect not only the past of fishermen of Klaipeda region, but also historical landmarks of the city life and its future. Today, you can see weathervanes on the streets of the Old Town of Klaipeda. Weathervane of community, certainly, shows where the wind blows”.

(It is believed that the tradition to set weathervanes on the Curonian fishermen boats originated in the mid of 19th century and after the World War II it was undeservedly forgotten. In 2014, 170 years turns since the day, when the mayor of Klaipeda Ernst Wilhelm Berben had issued an order that the fishermen in Curonian gulf are required to mark vessel by signs of rectangular shape with a geometric pattern of two different colors for weathervane to be visible from a distance, the red and white tape were attached.)

Consul General of the Russian Federation in Klaipeda, Vladimir V. Novikov, wished chairman and members of the Tatar community further success in the unity of the Tatars, and all guests fruitful cooperation under the arches of the House of national minorities. He promised to continue close cooperation and assist in uniting the communities in the city.

National communities of the city prepared a gift not only luxurious bouquets of roses, but also songs and dances in their own performance.

Member of society “Nur” Fania Kamininene -Teacher –Methodist of gymnasium “Gabiyos”, a member of the International Union of Writers.