Home / News / Participants of the master class of the project “Khәrәkәttә – bәrәkәt”: “I want the historical heritage of the people not to be forgotten” 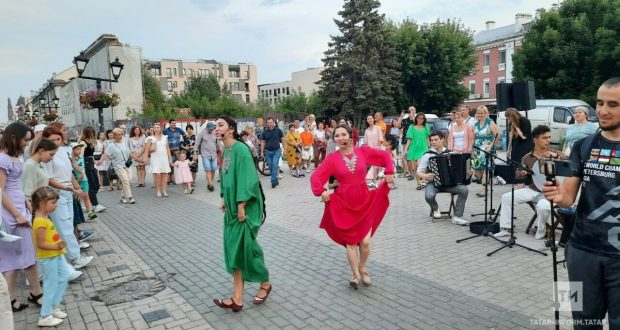 Participants of the master class of the project “Khәrәkәttә – bәrәkәt”: “I want the historical heritage of the people not to be forgotten”

At the next lesson on Bauman Street, the townspeople played the game “Zalida” and learned the movements of the Tatar dance.

The day before, on Bauman Street, Kazan residents played the musical and dance game “Zalida” and learned the movements of the Tatar folk dance. The next lesson in the Tatar language within the framework of the project “Khәrәkәttә – bәrәkәt” was conducted by choreographers Saida Minubayeva and Gulsina Galimullina.

The event began with a performance and continued with a master class and games. The visitors learned the main movements of the Tatar folk dance – “Berenche Tatar Yoreshe”, “Ukchabash”, “Borma”, “Chalyshtyru”, “Chyrshy”, danced in a round dance and in pairs, and also played the games “Tүgәrәk uen”, “Kara-karshy ”, “Kapka” in the format “Zalida”. In addition, the participants had the opportunity to demonstrate their skills, which they received at the master class.

Among the newly minted dancers at the event was a resident of the capital of the Republic of Tatarstan Ilnar Shagivaliev. He noted that the events of the project “Khәrәkәttә – bәrәkәt” are interesting for both citizens and tourists. “I saw Tatar dances at weddings, but before that I had never specially learned them, as today. I want the historical heritage of our people not to be forgotten,” said the citizen.

Residents of the regions of the republic also played “Zalida”. According to Zufar Shaidullin, who came to Kazan from the Laishevsky district, he took part in the master class with pleasure. The guest of the city expressed his gratitude to the organizers. “In the future, I would like more such classes to be held,” Z. Shaydullin shared.

The event was accompanied by live music. Bayan player Gazinur Ravilov, multi-instrumentalist Aidar Abdrakhimov, master of playing the harp and throat singing Fanil Vildanov helped in this, the department for the implementation of national policy in the field of linguistic culture of the Executive Committee of Kazan reported.

According to Guzel Sagitova, Deputy Head of the Executive Committee of Kazan, the main goal of the project is to teach the Tatar language, preserve folklore and create interest in dance art. “This year, at the VIII All-Russian Congress of Teachers of the Tatar Language and Literature, the President of Tatarstan Rustam Minnikhanov supported the projects of the Kazan City Hall and noted the need for other districts to adopt our experience. So, in Yelabuga, following our example, they have already begun to hold events in the Tatar language,” shared G. Sagitova.

We remind  that in Kazan this year in the public spaces of Kazan, 5 summer sports and creative classes of the project “Khәrәkәttә – bәrәkәt” have already taken place. At the last of them, children and their parents learned the basic movements of breaking. Project meetings will be held until September. In the summer season last year, 14 classes were held.