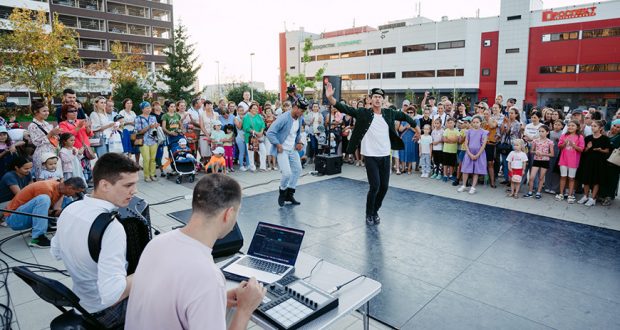 The ballet dancers of the State Song and Dance Ensemble of the Republic of Tatarstan held the next lesson of the project “Hәrәkәttә – bәrәkәt”.

On the square in front of the cultural center “Chulpan” in Kazan, “Batyr Battle” was held – a master class and a dance battle in Tatar dance. The new format of the project “Khәrәkәttә – bәrәkat” was presented by the Kazan City Hall.

“Batyr Battle” was held by ballet dancers of the State Song and Dance Ensemble of the Republic of Tatarstan Vladislav Utkin and Danil Iskhakov. The event was accompanied by live music: accordionist Gazinur Ravilov and beatmaker, DJ Malsi Music helped the artists.

The event began with a performance – ballet dancers competed in a Tatar dance battle. After that, Kazan citizens voted for their favorite artist. Those who voted for Vladislav Utkin joined his team, and those who appreciated Danil Iskhakov became full-fledged dancers of his team.

This workshop is suitable for people of all ages. Our main task is to convey to our children the traditions, dance movements that have been passed down to us from our ancestors,” emphasized Vladislav Utkin.

At the master class, the participants learned such Tatar dance movements as “borma”, “chalyshtyru”, “triangle”, “kadak kagu”. Both children and adults competed among themselves in two teams, showing their skills. The master class ended with a group dance.

Kazan citizens and guests of the city gladly joined the dance. “I watched with admiration the dance of these guys, who danced like real horsemen. We were looking forward to this master class and took part in it with pleasure. I would like there to be more such events, because it is interesting for everyone,” said Tatyana, a participant in the master class.

We remind   that in Kazan, a series of summer sports and creative activities of the project “Khәrәkәtә – bәrәkәt” started in 2021, the Year of Native Languages ​​and National Unity. Last year, 14 master classes were held. This year, classes were held in the Tatar dance “Yarmak vagy”, tap dance, aerobics, Tatar folk dance, break dance, dance and music game “Zalida”. The Tatar dance class will also take place on August 30, according to the department for the implementation of national policy in the field of linguistic culture of the Executive Committee of Kazan.

The events “Khәrәkәttә – bәrәkat” are held by the City Hall of Kazan together with the Directorate of Parks and Squares of the city with the support of the Commission under the President of Tatarstan on the preservation and development of the Tatar language and native languages ​​​​of representatives of the peoples living in the Republic of Tatarstan. Classes are scheduled from June to September. A detailed schedule can be tracked in the Telegram channel.