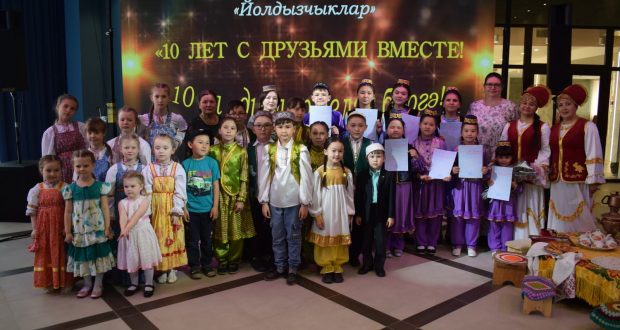 On May 22, 2022, a holiday dedicated to the 10th anniversary of the creative activity of the Yoldyzchyklar children’s vocal ensemble (headed by G. M. Satysheva) of the Center for Tatar Culture of the ONK “House of Friendship” was held at the Sever CDC. On this solemn, exciting day, children and adults gathered in the hall, who are united by interest and love for the work of the Yoldyzchyklar vocal ensemble.

The event began with a presentation about the brightest moments of the creative life of our young vocalists, about their best performances, about their achievements. Elena Alexandrovna Nalgieva, Deputy Director of MBUK TKDC “Sever”, congratulated the head and members of the ensemble with warm and sincere wishes, presented letters of thanks and gifts. A lot of congratulatory words sounded on this day to our anniversaries. The guys came to congratulate their colleagues in vocal creativity: the children’s ensemble “Yaktash” (headed by Deket A.M.) BOU DO “Center for Children’s Creativity”; children’s ensemble of Russian song “Robin” (headed by Glebova K.S.), as well as parents of young artists.

The concert passed in one breath. The grateful audience, enjoying the colorful and sincere musical numbers of talented performers, gave warm, sincere applause in response. Solemn and at the same time cheerful and joyful holiday gave children and parents a lot of positive, good mood and positive emotions.