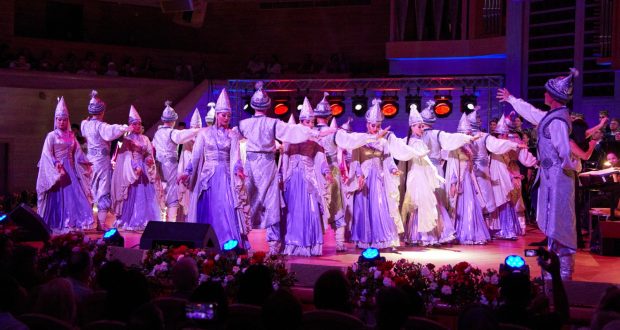 The gala concert was also attended by representatives of federal and Tatarstan government authorities, the Government of Moscow, the Minister of Culture of the Republic of Tatarstan, the diplomatic corps, heads of leading universities in Moscow, as well as well-known compatriots – spiritual leaders, eminent doctors and scientists of the capital, cultural and art figures, politicians, athletes and entrepreneurs.

Welcoming the guests and participants of the event, Rustam Minnikhanov said that it is a great honor for each representative of the regions to be in the capital of our country, in Moscow.

“Today we are traditionally here, together with you. And of course, we sincerely thank each of you – you are supporters of Tatarstan, people from Tatarstan. You are all rooting for Tatarstan. Every year, in August, on the eve of the Day of the Republic, we hold the Days of Culture of Tatarstan in Moscow. I want to thank the Government of Moscow, personally the mayor of the capital, Sergei Semenovich Sobyanin, for their continued support of this important tradition,” Rustam Minnikhanov said.

Greetings from Moscow Mayor Sergei Sobyanin were read from the stage:

“I welcome you to the Days of Culture of the Republic of Tatarstan in Moscow,” the text of the greeting reads. – This bright event in the social and cultural life of the capital emphasizes the age-old friendship of the peoples of Russia and the close ties between Moscow and the Republic of Tatarstan. Muscovites love and appreciate the original creativity of the masters of the arts of Tatarstan. And this year the holiday will delight us with wonderful concerts, creative meetings and exhibitions. I wish the participants and guests of the Days of Culture of Tatarstan in Moscow good health, well-being and success in creative work.”

Recall that from August 21 to 25, 2022, the Days of Culture of the Republic of Tatarstan were held in Moscow. The festive program included screenings of feature films in the Tatar language. Also, the Russian State Children’s Library conducted tours of the expositions as part of the Days of Tatar Children’s Literature. Flowers were laid at the monument to the great Tatar poet Gabdulla Tukay and at the monument to Musa Jalil, creative meetings with poets and writers from the Republic of Tatarstan.