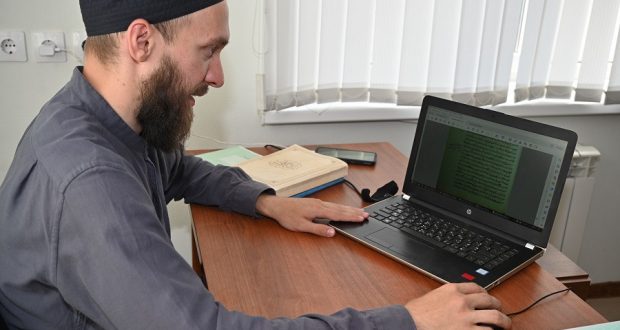 The DUM RT started work on the translation from the Old Tatar into the modern Tatar literary language of the tafsir Qur’an, written by the outstanding Tatar theologian, educator Murad Ramzi. This work, the volume of which is more than 700 pages, was written by a scientist in 1927-30, when he lived in the Chinese city of Chuguchak. The translation of the handwritten Old Tatar text into the modern Tatar language and Cyrillic is carried out by Nurislam hazrat Valiulla, a specialist in the department for Sharia issues of the Spiritual Muslim Board of the Republic of Tatarstan.

It is expected that the work of translating the famous tafsir into modern Tatar will take at least a year. First, the work in the original language is transliterated into Cyrillic, after which work will be carried out to translate the finished text into modern Tatar. The translation of the famous tafsir will be valuable in terms of studying the Tatar theological heritage, as well as the features of the Tatar language and the Tatar traditions of compiling tafsirs on the example of this great work.

Currently, 25 suras have been translated into Cyrillic. For a more accurate understanding of the meaning of the text, Nurislam Khazrat uses dictionaries of the Old Tatar, Turkic, and Arabic languages ​​in his work.

– Ramzi’s works such as “Maktubat imam Rabbani”, “Talfik al-akhbar va talkih al-әsәr fi vakaig Kazan va Bolgar va moluk аt-tatar”, “Rashakhat gaynal-khayat” are known throughout the Muslim world. Therefore, the study of this tafsir is of great importance in the study of the Tatar theological heritage and the Tatar scientific language style of the early twentieth century. For us, the interpretation of certain verses from the point of view of Murad Ramzi is of theological interest. In his work, he made marks and additions on the margins of the pages, so the tafsir contains a lot of valuable information, says Nurislam Hazrat.

The issue of preserving, studying and disseminating the heritage of Murad Ramzi and, in particular, the translation of his tafsir Qur’an from the Old Tatar into the modern Tatar language was raised on May 11 this year during a meeting between Mufti of Tatarstan Kamil Hazrat Samigullin and a public figure, candidate of historical sciences Farid Urazaev. Tafsir of Murad Ramzi is kept in his private collection. After this meeting, the work was scanned by the specialists of the Khozur Publishing House and submitted for translation into the Tatar language.

Even earlier, on May 6, the Sarmanovsky District hosted the International Scientific and Practical Conference dedicated to the spiritual heritage of the outstanding Tatar religious figure, scientist Murad Ramzi. A scientific meeting entitled “The famous theologian, educator and public figure Murad Ramzi: history and modernity” was organized by the executive committee of the World Congress of Tatars as part of the celebration of the 1100th anniversary of the adoption of Islam by the Volga Bulgaria in the homeland of the great theologian. Mufti of Tatarstan Kamil hazrat Samigullin became the guest of honor of the scientific meeting. The international conference made it possible to present to the participants the unique work of the scientist – the translation of the Qur’an into the Tatar language.