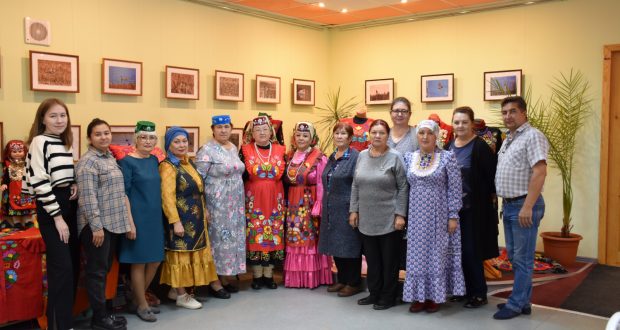 On August 21, 2022, in the Park of Culture and Leisure, as part of the celebration of the Day of the City of Tara, a creative meeting “Duslar belan berg” – “Together with friends” was held. Such a gift for the audience was organized by the specialists of the Center for Tatar Culture of the PMC “House of Friendship”. In the concert program, soloists and groups of the Centers of Tatar Culture of the Omsk Region districts demonstrated their skills and talents: Tarsky – the folk vocal ensemble “Nur” of the Center for Tatar Culture of the ONK “House of Friendship”, Bolsherechensky – Zakhirzhon Makhmutov and the folk vocal ensemble “Naza” from. Ulenkul, Kolosovsky – Konstantin Sizov and the head of the people’s “Mahabbat” – Akram Amirov. At the beginning of the evening, the audience was greeted by guests from the Sverdlovsk region, employees of the MUK NCC of the village of Arakaevo, headed by director Salavat Sagetdinovich Gubaev, who shared his experience in preserving and developing the Tatar folk culture of rituals, customs and traditions in the Middle Urals. The audience watched the video with great interest, which reflected all the work of the national cultural complex of the village of Arakaevo, Nizhneserginsky district, Sverdlovsk region. A pleasant surprise was a musical gift performed by Salavat Gubaev and Dinara Khakimova. Loud, prolonged applause and warm, kind words of gratitude from the audience – this is the reward for the participants of the creative evening! Guests of the holiday received a lot of positive and excellent mood. Leaving the cozy hall, the audience said words of gratitude to the organizers of the event.

On August 22, 2022, a master class on tambour embroidery was conducted by the employees of the MUK NCC of the village of Arakaevo as part of the implementation of the project “Academy of Folk Culture of the Tara Irtysh Region” with the support of the Presidential Fund for Cultural Initiatives. The project manager is Elena Alexandrovna Nalgieva. For the participants of this event, the specialists of the MUK NCC of the village of Arakaevo presented a wide range of products embroidered in the technique of chain stitch, used both in everyday life for decorating home interiors, and during family and religious ceremonies and folk holidays. They decorated curtains, tablecloths, pillowcases, napkins, pocket handkerchiefs, towels, and prayer rugs with Tatar patterned embroidery. The delightful works of craftswomen from the village of Arakaevo literally fascinated the participants of this event.

The main purpose of the master class was to show the variety of ornaments and drawings of the villages and villages of the Middle Urals, to teach and preserve the technique of tambour embroidery and the transfer of the Tatar ornament to the fabric. An unpretentious hook in the hands of skilled craftswomen really worked wonders, turning a small piece of cloth into a real work of art. Gulshat Munirovna Satysheva, a methodologist of the center of Tatar culture of the PMC “House of Friendship”, invited to this master class people who are united by creativity, these are members of the Ak Kalfak association (headed by G.V. Baiguzina) r.p. Bolshereche, members of the folk vocal ensemble “Nur” and the children’s vocal ensemble “Yoldyzchyklar” (headed by Satysheva G.M.) of the Center for Tatar Culture of the ONK “House of Friendship”, teachers of circles of the Budgetary Educational Institution of Additional Education “Center for Children’s Creativity named after. L.A. Vandysheva” of the Tara municipal district of the Omsk region.

We express our gratitude to Salavat Sagetdinovich Gubaev, the head of the MUK NCC of the village of Arakaevo, Sverdlovsk region, and specialists, masters of tambour embroidery, Dinara Samatovna Khakimova and Anfisa Salimyanovna Sagatdinova. We wish them inspiration, further creative success, the realization of all their plans, health and well-being. We thank the head of this project, Elena Aleksandrovna Nalgieva, for her great support in all endeavors in the preservation and development of the Tatar culture in the Tara municipal district of the Omsk region.