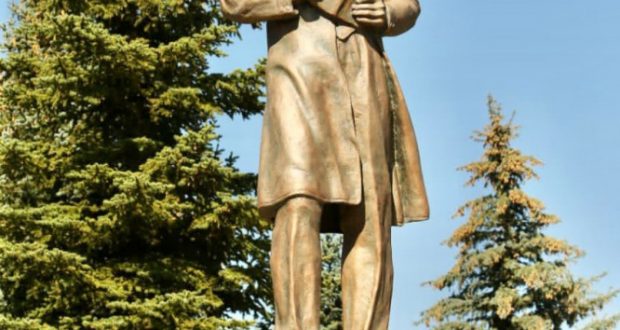 On August 23, in the village of Novy, Azmushkinsky rural settlement of the Tukaevsky municipal district of the Republic of Tatarstan, a monument to the Tatar folk poet Gabdulla Tukay was opened and a new House of Culture was opened.

The participants of the event laid flowers at the monument to Gabdulla Tukay and the obelisk to the Fallen Soldiers.

Then the guests went to the building of the rural House of Culture, where in the foyer there was an exhibition of Pedigrees, famous natives of the Tukaevsky district – Shaҗәrә.

Having familiarized themselves with the exhibition, the guests went to the auditorium of the House of Culture, where the choreographic group “Enge” of the Knyazevsky rural House of Culture presented the dance “Garmun” on the stage.

In order to implement measures to create a modern urban environment on the territory of the Republic of Tatarstan for 2022. The Park named after Gabdulla Tukay was built on the club territory of the Novy settlement. Financing is made at the expense of funds from the republican budget.

All zones are interconnected by illuminated paving pavements. The park is decorated with navigation.

On the territory of the park there is a monument to the Tatar folk poet Gabdulla Tukay. The author of which is the sculptor Mingaliev Khalit Khamitovich.

As part of the program for the overhaul of cultural facilities, a major overhaul of a rural house of culture in the Novy settlement was carried out this year. The total area of ​​the building is 1280.1 sq.m. It includes; an auditorium for 274 seats, a choreography hall, a library and a sports hall.