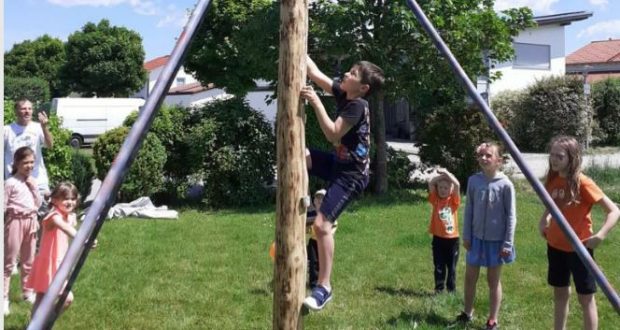 A resident of Tuimazy held a holiday “Tatar Spring” in Germany

The idea to hold the Tatar Spring holiday in the German city of Burchhausen, where Razif now lives and works, was born to him six years ago. Then he participated in the Sabantuy in Dresden. The man decided that not everyone living in Bavaria has the opportunity to travel hundreds of kilometers from home to plunge into their native culture, so they need to organize a national holiday at home.

During the year, he bought sports equipment, negotiated with musical groups, looked for a suitable place, invited friends. In 2017, about 30 people came to him for the “Tatar Spring”, and a year later there were already 100. And if in the first two meetings there were only Bashkirs and Tatars among the participants, then in 2019 Russians, Poles and even an indigenous the population is German. The holidays were fun, with prizes and national treats.

“Then the coronavirus pandemic began, and for two years in a row I didn’t hold the Tatar Spring,” says Razif. – This year we revived the tradition and organized a holiday. He passed on the territory of the evangelical church. Its founder and pastor is from Russia, so he allows us to meet here. At the church there is a large room where our musical groups perform and lunch is held. By the way, for lunch with an assistant Natalia Ivanova from Kazakhstan, they prepared triangles and stuffed peppers, I salted a goose – in previous years there was kazylyk instead of it, I brought it from Bashkiria especially for the holiday. Mikhail helped me install the sports facility, whom we met this year at the Immortal Regiment, and my son Arthur is a university student. He also participated in competitions and competitions. For three years I bought prizes, inventory and made cartoon characters from cardboard: Masha and the Bear, the Hare and the Wolf from “Well, you wait!”.

“Tatar Spring” is somewhat reminiscent of Sabantuy. Participants run in bags, carry water with yokes, pull a rope, collect potatoes blindfolded, participate in a fight with bags, play table tennis. Starting this year, children could also climb a three-meter vertical pole, take a number on the top of their head and receive a prize on it. Razif brought the log from the forest on his own, having previously agreed with the forester and paid for it.

By the way, you do not need to ask permission from the city authorities to hold a holiday. Tuymazinets notes that the organization of the “Tatar Spring” is an expensive and troublesome event, but it gives him pleasure to acquaint the population living here with the Tatar culture, traditions, music and cuisine.